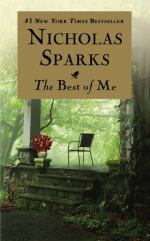 The Best of Me Summary & Study Guide

Nicholas Sparks (author)
This Study Guide consists of approximately 30 pages of chapter summaries, quotes, character analysis, themes, and more - everything you need to sharpen your knowledge of The Best of Me.

The Best of Me Summary & Study Guide Description

The Best of Me Summary & Study Guide includes comprehensive information and analysis to help you understand the book. This study guide contains the following sections:

This detailed literature summary also contains Topics for Discussion on The Best of Me by Nicholas Sparks (author).

"The Best of Me" is a novel by author Nicholas Sparks. In this novel, Dawson Cole returns to his hometown for the first time after twenty years to fulfill the last wishes of his dear friend and surrogate father, Tuck Hostetler. When he arrives, Dawson is surprised to find that Tuck arranged for Dawson's high school girlfriend, Amanda, to join him in fulfilling these last wishes. In fact, it soon becomes apparent that Dawson and Amanda seeing one another again and perhaps rekindling their old romance is the main goal of Tuck's final wish. However, Amanda is married and Dawson's family, a group of notorious criminals, pose a danger that could alter not only Tuck's plans but Dawson's future irrevocably. "The Best of Me" is an emotion packed romance novel that fulfills the expectations readers have come to expect from Nicholas Sparks.

Dawson Cole works on an oil rig off the coast of Louisiana. One day an explosion on the rig nearly took Dawson's life, but a stranger in the water showed Dawson where to go, saving his life. Months later, Dawson learns of the death of his good friend, Tuck Hostetler. Dawson rushes home to see to Tuck's final wishes even though he has not been home in twenty years.

Dawson was born into a notorious criminal family, allowed to get away with many petty crimes out of the fear the town feels toward this family. Dawson is not like his family, but no one really believes that a Cole could be honest or law abiding. For this reason, Dawson lived an isolated life in his hometown. In fact, as a teen Dawson left his father's home and began living in the garage of local mechanic, Tuck Hostetler. Tuck, who had recently lost his wife, allowed Dawson to stay, forging a relationship that would last the rest of Tuck's life.

Late in his teens, Dawson became lab partners with Amanda Collier, the daughter of a prominent family. They soon fell in love and began dating despite the tension this caused Amanda with her parents. When high school graduation came and Amanda had to make a choice between college and Dawson, Dawson forced her to choose school. Shortly thereafter, Dawson was involved in an accident in which the truck he was driving struck and killed a local doctor. Dawson plead guilty to the charges even though it was simply an accident. Dawson served four years in prison and his parole living with Tuck. When he was free, Dawson left town and never looked back.

When Dawson arrives at Tuck's, he is surprised to find Amanda there. Amanda had struck up a friendship with Tuck in the last few years of his life and for this reason was called by Tuck's lawyer upon his death. Amanda and Dawson talk for a while, even having dinner together in Tuck's house, before parting. When Amanda goes home to her mother's, her mother lectures her about her relationship with Tuck and how it looks, especially since Amanda is a married woman. Amanda's mother, however, is unaware that Amanda has become disillusioned in her marriage because of her husband's alcoholism in the wake of the death of their daughter, Bea.

The following day, Amanda and Dawson visit Tuck's lawyer and learn that they are to scatter his ashes at a cabin he owned with his wife. This means another full day together. Amanda and Dawson have lunch together and discuss their plans. When Amanda goes home, Dawson remains at Tuck's to repair a car Tuck was working on when he died. As Dawson works, he is unaware that his cousin, Crazy Ted, is stalking him with plans to kill him for a feud that began years ago. As Crazy Ted sneaks up to Tuck's, Dawson sees the same man he saw the day of the oil rig explosion and chases him through the woods. This causes Dawson to find Crazy Ted's truck and learn of his danger. Dawson confronts Crazy Ted, beating him and returning him to the family compound.

The following day, Dawson and Amanda go to Tuck's cabin and learn from a letter written by Tuck about his love story with his wife. This inspires Dawson and Amanda, as Tuck clearly hoped, and they spend the night alone together. The following day, Amanda makes the agonizing decision to return to her family. Dawson prepares to leave town, but returns to Tuck's when he recalls that he left a letter Tuck had written to him there. As Dawson enters town, he again sees the strange man who saved him after the oil rig explosion. Dawson follows this man to a bar where he discovers the young doctor he killed has led him to save his son, now grown, from a beating Dawson's cousins are giving him. Dawson saves the young man, but is killed when Crazy Ted shoots him in the head. At the same time, Amanda's son has been in an accident and needs a heart transplant. Amanda will later learn it is Dawson's heart her son received.

More summaries and resources for teaching or studying The Best of Me.

The Best of Me from BookRags. (c)2022 BookRags, Inc. All rights reserved.