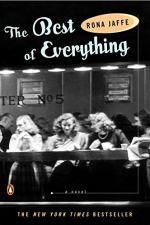 The Best of Everything Summary & Study Guide

Jaffe, Rona
This Study Guide consists of approximately 68 pages of chapter summaries, quotes, character analysis, themes, and more - everything you need to sharpen your knowledge of The Best of Everything.

The Best of Everything Summary & Study Guide Description

The Best of Everything Summary & Study Guide includes comprehensive information and analysis to help you understand the book. This study guide contains the following sections:

This detailed literature summary also contains Quotes and a Free Quiz on The Best of Everything by Jaffe, Rona .

The following version of this book was used to create this study guide: Jaffe, Rona. The Best of Everything. Penguin Group, New York, 1958.

Caroline Bender completed her college degree a semester early in order to clear the way to marry her fiancé, Eddie. However, Eddie breaks their engagement to marry a young socialite from Texas. Caroline, with nothing to occupy her time, begins work in the typing pool of Fabian Publishing, a multi-faceted company with departments publishing an array of magazines and books. Caroline arrives for work her first day with a determination to fit into this world and to make a life for herself. She is initially determined to forget Eddie and finds that after more than a year, she is able to think about him without devastating pain, though she does not fall in love with anyone else.

Caroline becomes friends with four other young women, all working at Fabian Publishing. Mary Agnes Russon knows everything that goes on in the office, and she helps Caroline begin navigating the office politics. Despite her knowledge, Mary Agnes is removed from the office's social scene with her eye on a single date more than a year in the future. She and her fiancé are planning an elaborate wedding. They spend every lunch hour together and Mary Agnes often brings in the trappings of her upcoming wedding.

April Morrison is another of the young women in the typing pool. She arrived in New York with plans to become an actress, but she works at the typing pool to make ends meet. April admires Caroline's style and Caroline admires April because she has an apartment of her own. It is a very small space, but April loves it as a sign of her independence. April is ecstatic when she has a chance meeting with a wealthy young man named Dexter. They begin dating and April initially refuses to have sex with him. When she becomes afraid she will lose him, she gives in. When she becomes pregnant, she hopes it will be the catalyst that pushes him to marry her. Instead, Dexter pushes her to have an abortion with vague promises of their future together. He eventually makes it clear he will never marry her and two of his friends have sex with her, making it clear that Dexter has revealed the details of their sex life. A few months later, April meets an extraordinary young man who makes it clear he wants a life with her but she struggles with her memories of the past. Caroline advises her to put the past firmly behind her and to accept the future that lies ahead. April leaves New York to marry Ronnie, accepting Caroline's advice.

Barbara Lamont works at one of the magazines in Fabian Publishing. She married early, like many young girls of the time, and expected a happy future. By the time she gave birth to a daughter, she and her husband were struggling financially and emotionally. Neither knew how to keep their love from dying amid the onslaught of everyday life and they divorced. Now, Barbara lives with her young daughter and her mother in a small apartment. She is responsible for the little family but still dreams of a life of happiness, including a loving marriage with a man who will accept her daughter. She eventually finds that with Sidney, though they do not immediately act on their feelings for each other.

Gregg Adams is another struggling young actress and she and Caroline become roommates in Gregg's small apartment in the same building where Barbara lives. Gregg has an encounter with a brilliant young director named David Wilder Savage and they soon become lovers. Gregg falls in love but that love becomes obsession that takes over every aspect of her life. She smothers David with her attention and her insecurities. Though he continues to tell her that he needs time to be alone sometimes, she is incapable of allowing him that space. When David can take it no longer, he breaks off their relationship. Gregg cannot accept that any more than she could accept that David sometimes needed to be alone. She spends hours sitting outside his apartment, listening to the sounds of David spending time with his new girlfriend. She picks up pieces of his trash, keeping items that include cigarette butts. Caroline sees the obsession but, by that time, is caught up in the turmoil of briefly reuniting with Eddie.

Eddie arrives in New York for a visit. He and Caroline are immediately caught up in a love affair and Caroline feels he has returned to her. She expects him to make plans to divorce his wife and marry her but Eddie has a different plan. He says Caroline should quit her job and take a position in Dallas. He plans to set her up in an apartment and says he can spend at least one or two evenings a week with her. Caroline says she will settle for nothing less than marriage, but Eddie refuses to divorce his wife and begs Caroline to think it over before she declines. Caroline knows she will be giving up any chance of a family of her own and that this is an indication that she loves Eddie but that he is only infatuated with her.

Caroline has been seeing a young man named Paul and she invites him over to assuage the pain of losing Eddie a second time. They are together when David telephones, telling Caroline that Gregg has fallen down the steps in his apartment building. Gregg is dead and Caroline is overwhelmed with guilt, remembering that she pretended to be asleep the night before to avoid talking to Gregg. Paul has proposed and Caroline impulsively agrees, feeling that she would do anything to keep from being alone. But as soon as Paul leaves her apartment, Caroline realizes she cannot marry Paul because she does not love him. A famous writer named John Cassaro impulsively telephones Caroline in the middle of the night, asking her to go to Vegas with a group of his friends. Caroline knows John is not the kind of man to provide the future she wants, but she is devastated by Gregg's death and Eddie's betrayal, and she accepts. Eddie telephones Caroline several times before he leaves, believing she will change her mind and agree to move to Dallas. She does not answer the phone and he eventually boards the plane, taking a newspaper to read during the flight. He quickly sees Caroline's picture with John Cassaro, taking a a Vegas hotel where a reporter had asked by John and Caroline were together, prompting John to strike the reporter. Eddie looks at the photo with distaste and believes that he is lucky to be out of any kind of relationship with Caroline.

More summaries and resources for teaching or studying The Best of Everything.

The Best of Everything from BookRags. (c)2022 BookRags, Inc. All rights reserved.