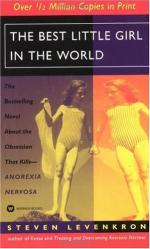 The Best Little Girl in the World Summary & Study Guide

Steven Levenkron
This Study Guide consists of approximately 29 pages of chapter summaries, quotes, character analysis, themes, and more - everything you need to sharpen your knowledge of The Best Little Girl in the World.

The Best Little Girl in the World Summary & Study Guide includes comprehensive information and analysis to help you understand the book. This study guide contains the following sections:

This detailed literature summary also contains Topics for Discussion and a Free Quiz on The Best Little Girl in the World by Steven Levenkron.

Francesca is a fifteen-year-old who sees herself as lacking in many areas, including her body weight. She describes herself as "a monster" at five-foot-four and ninety-eight pounds and immediately prepares to follow the advice of her ballet teacher to "thin and firm." As the story opens, Francesca is standing at the ballet barre during dance class. She is constantly comparing herself in the mirror to the others in the class, straightens her leg to be more like one girl and straightens her pose to be more like another. The teacher, "Madame", is counting out a beat and changes the words from counting to tell Francesca that she's doing very well. Madame does later admonish her, saying that she must be "firm and trim". Francesca takes the admonition to heart and begins losing weight, but the desire to lose weight isn't the basis of her problem and the complex issues become a job her parents simply can't solve.

When Grace, Francesca's mother, discovers her daughter's condition, she is angry at what she calls Francesca's dieting. When Francesca's father, Hal, becomes involved, he is also angry and believes Francesca is simply being willfully disobedient. As her parents learn about anorexia, Francesca continues to lose weight until she's hospitalized and eventually passes out from shock, prompting doctors to introduce nutrition through a tube in her chest. Francesca soon comes to trust the second psychologist, Sandy Sherman. Sandy has had limited success treating anorexics and promises Francesca that he doesn't want to force her to eat but will help her find the source of her fears so that she no longer has to starve herself.

What Sandy comes to realize is that Francesca's parents have spent so much time and energy on the troubled life of their older daughter, Susanna, that Francesca has been on the outskirts of her own family. This feeling of alienation has prompted her to feel unworthy of affection and even friendship from anyone else as well, prompting Francesca's feelings that she never belongs in any situation. By the time Francesca has begun gaining weight, she's come to realize that her feelings and desires are valid. One example of this turn is her attitude toward her brother, Gregg, who is studying at Harvard. Gregg calls Francesca once at the urging of his mother but doesn't make time to visit her while she's in the hospital. During the phone call, Francesca is upbeat and later says it's because she fears Greg won't like her if she sounds depressed. Her roommate, Lila, says that's Gregg's problem—not Francesca's. Francesca later writes Gregg a letter telling him that she considers him "a shit" for not visiting her. Sandy says that Francesca's decision to write that letter, regardless of what Gregg might think, is another step in the right direction.

Through her work with Sandy and her views of another "skinny", Francesca comes to a greater understanding of herself, her ability to express emotions, and to fight for what she wants, and the desire to be healthy rather than so skinny that her life is in danger. When she has gained back up to eighty-five pounds, she is released from the hospital, which will begin another phase of her recovery.

More summaries and resources for teaching or studying The Best Little Girl in the World.

The Best Little Girl in the World from BookRags. (c)2022 BookRags, Inc. All rights reserved.