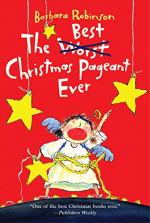 Barbara Robinson
This Study Guide consists of approximately 47 pages of chapter summaries, quotes, character analysis, themes, and more - everything you need to sharpen your knowledge of The Best Christmas Pageant Ever.

The Best Christmas Pageant Ever Summary & Study Guide includes comprehensive information and analysis to help you understand the book. This study guide contains the following sections:

This detailed literature summary also contains Quotes and a Free Quiz on The Best Christmas Pageant Ever by Barbara Robinson.

The Best Christmas Pageant Ever, by Barbara Robinson, is a heartwarming and humorous tale of a town that has its annual Christmas nativity reenactment shaken up when the rowdy Herdman clan high-jacks the play. The narrator introduces the Herdmans as the worst kids in the history of the world and goes on to detail their crimes. They smoke, curse, bully kids at school, steal, and even set fire to an old abandoned toolhouse. The product of an absent father and a mother who would rather work two jobs than parent her children, the six Herdmans take care of themselves.

When the narrator's little brother, Charlie, gets tired of Leroy Herdman stealing his dessert, he mentions that it does not matter because he gets all the snacks he wants at Sunday School. That sets the Herdmans on the trail and they show up at church the next Sunday with eyes wide open. Instead of a one time visit, the Herdmans hear about the upcoming Christmas pageant and decide to stick around and participate.

Meanwhile the pageant's regular director has an accident that puts her in the hospital, so the narrator's mother is drafted to lead the rehearsals. The rowdy Herdman bunch strong-arm their way into the main roles of Mary and Joseph, the three Wise Men and the Angel of the Lord and although they have never heard the Christmas story before, the newcomers are interested in learning everything they can. They see the injustice of how people treated Mary and Joseph by sticking them in a stable, get angry that King Herod wanted to kill baby Jesus and are confused as to why three rich kings would bring jars of oil as a baby gift. They question the standard way of thinking and raise real questions that cause the narrator to consider her own understanding of the nativity story.

Alice Wendleken, a prim and proper girl who has always played the role of Mary, is upset that Imogene Herdman has taken her spot. She makes a record of all the terrible things Imogene says and the incorrect things she does. She is waiting and hoping that the Herdmans will make one big mistake so that she can sound the alarm and get her Mother and others to demand that the Herdmans be removed from the pageant. Her opportunity comes when one of the church women enters the ladies' room during the pageant dress rehearsal and finds it filled with Imogene's cigar smoke. She calls the fire department and chaos breaks out, ending the rehearsal and setting off a firestorm of phone calls to the pastor, complaining about the Herdmans. Rev. Hopkins asks Mother if they should cancel the pageant, but she assures him that the show must go on and that it will be the best one yet.

The pageant begins as usual, but the Herdmans do indeed add their own special flavor to the production. However, the children have been changed by the knowledge of the story and are more subdued than usual. Amidst the candlelight and singing, the three Herdman Wise Men bring a ham from the food basket given to them by the church and Imogene begins to cry at the beauty and wonder of the scene of which she is a part. Everyone left the church that night talking about how the pageant was somehow different this year and the narrator shares that she knows why - the Herdmans did not portray the Holy Family and the birth of Jesus in a stiff, by the book manner. Instead, they related to the needs of the Family and put their hearts into playing their parts.

More summaries and resources for teaching or studying The Best Christmas Pageant Ever.

The Best Christmas Pageant Ever from BookRags. (c)2022 BookRags, Inc. All rights reserved.