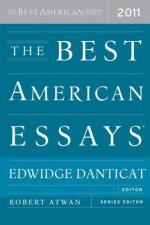 This Study Guide consists of approximately 32 pages of chapter summaries, quotes, character analysis, themes, and more - everything you need to sharpen your knowledge of The Best American Essays.

This detailed literature summary also contains Topics for Discussion and a Free Quiz on The Best American Essays by .

This collection of essays contains a selection of writing from a number of distinguished, contemporary American writers. The topics range greatly, but generally cluster around three broad categories. The first part of the book focuses on the theme of personal identity. It is followed by a collection of what might be called descriptive essays, essays which are more reflective than persuasive in nature. The final third of the book is comprised of political and philosophical essays which aim to convince the read of some particular argument.

"The Personal Voice," the book's first section, considers the notion of identity from a variety of perspectives. Since a large component of personal identity is race, especially in a nation as diverse as America, many of these essays reflect on the experience of being a minority. In "Silent Dancing" Judith Ortiz Cofer recounts her experience as a Puerto Rican immigrant to New York City. Through the lens of an old video camera, she reflects on how the desire to be part of "white culture" divided the Puerto Rican community. "In the Kitchen" addresses the same problem of assimilation, but this time from an African-American perspective. Gates uses the stubborn nature of black hair as a symbol for the indelible mark blackness has on one's identity. Tan considers the problem of assimilation from the perspective of language in "Mother Tongue." Though she herself was able to learn to speak and write English proficiently, her mother, a Chinese immigrant, had her own, unique brand of the language, which was often a source of difficulty for the family. As gender is also an important part of personal identity, this section also includes several reflections of femininity by female authors such as Marcia Aldrich's "Hair," Lucy Grealy's "Mirroring," Rebbecca McClanahan's "Book Marks."

"The Attentive Mind" contains essays which focus on describing some personal experience. A number of these are straightforward attempts to give the reader a better understanding about a certain person or historical event. "Turning Point," for example, focuses on the life and art of Philippe Petit, the French acrobat and performance artist who became famous for tightrope walking between the two towers of the World Trade Center. In light of the September 11, 2001, terrorist attacks, his art has a new, bittersweet significance. Likewise, "Ali in Havana" is the story of Muhammad Ali visiting Fidel Castro in Cuba. The essay's intent is to capture the personalities of those two figures, both of whom were among the most famous icons of the era.

"The Public Sphere" is a collection of argumentative essays. The topics of these essays range widely. Some of the essays deal with very contentious topics. Vicky Hearne's "What's Wrong With Animal Rights" attempts to philosophically undermine the philosophy behind animal rights by distinguishing between the nature of an animal and the nature of a human. Joy Williams' "The Killing Game" takes the opposite attitude toward animals. She denounces as "malevolent" those hunters who kill for sport and attempts to expose the various contradictions and barbarities that take place in modern hunting. Other essays focus on less contentious issues. For example, in "Think About It," Frank Conroy reflects on the sometimes complex process of learning. Learning even a single fact can sometimes take years; other times, a topic can be so immense that learning could go on seemingly indefinitely.

More summaries and resources for teaching or studying The Best American Essays.