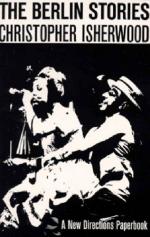 Christopher Isherwood
This Study Guide consists of approximately 42 pages of chapter summaries, quotes, character analysis, themes, and more - everything you need to sharpen your knowledge of The Berlin Stories.

This chapter begins with William describing how Otto landed in jail (see Chapter 6) - a quarrel with Anni led him into a drunken confrontation with some Nazis, which in turn led to a spell in prison. William then describes Arthur's plans for a dinner party, how he (William) arrives late and discovers there in fact is no party - Arthur pawned the carpet to raise money for food and drinks, but Schmidt had taken it and the party had to be canceled. Discussion of Arthur's lack of funds leads to a discussion of Bayer, whom Arthur says owes him money for the missions he's undertaken for the Communist Party (including the trip to Paris).

At the beginning of this chapter, William discovers that Arthur has left Berlin, suddenly and...

More summaries and resources for teaching or studying The Berlin Stories: The Last of Mr. Norris, Goodbye to Berlin.

The Berlin Stories: The Last of Mr. Norris, Goodbye to Berlin from BookRags. (c)2021 BookRags, Inc. All rights reserved.