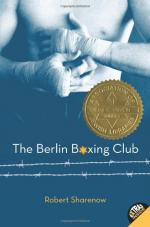 Plot Summary
+Chapters Summary and Analysis
Part I: How I Became Jewish, First Round Knockout, and Winzig and Spatz
Part I: Galerie Stern, Der Meister, and The Barter
Part I: Boxing Lesson No. 1, Uncle Jakob, and Drawing in on Max
Part I: Greta, Principal Munter, and The Return of Piss Boy
Part I: Barely Floating, and The Countess
Part II: The Berlin Boxing Club: Pandora’s Box; Learning to Stand, Breathe, and Eat; and Neblig and Joe Palook
Part II: A Prayer: Uniform Shirts and Rotten Apples; The Secret History of Jewish Boxers; and Stern vs. Strasser
Part II: Concentration; A Real Fighter; Early Dismissal; and Bertram Heigel
Part II: The Brown Bomber; Sour Sixteen; The Reopening of Galerie Stern; and Word from Dachau
Part II: Seeing Red; The Fight; and The Real Max
Part II: Good-bye, Winzig; The 1937 Youth Boxing Championship; and Ice Cream
Part III: The Last Picasso; The Mongrel; Return to the Berlin Boxing Club; and The Rematch
Part III: Broken Glass; Drop Cloth; An Evening Stroll with Our Aunt; and The Feint
Part III: The Excelsior; Healthy Instincts; and The Amerika
Free Quiz
Characters
Symbols and Symbolism
Settings
Themes and Motifs
Styles
Quotes
Order our The Berlin Boxing Club Study Guide

Robert Sharenow
This Study Guide consists of approximately 71 pages of chapter summaries, quotes, character analysis, themes, and more - everything you need to sharpen your knowledge of The Berlin Boxing Club.

This detailed literature summary also contains Quotes and a Free Quiz on The Berlin Boxing Club by Robert Sharenow.

The book “The Berlin Boxing Club” by Robert Sharenow covers a five-year period in the life of Karl Stern, a fictional German teen who trains under real life German world champion boxer Max Schmeling. The novel is set during the early years of Hitler’s rule. Although the members of Karl’s family aren’t practicing Jews, they have Jewish ancestry. At school Karl is branded as a Jew and eventually kicked out because of his lineage. Karl uses his boxing as a refuge as Hitler’s rules and regulations on the Jews becomes more and more restrictive. However, his dream to be a championship German boxer is killed when it is discovered he is a Jew. Soon afterward, the Stern family is torn apart when their home is attacked during a night of looting by members of the Nazi party. When Karl’s father is accused of being a traitor and thrown in jail, it is up to Karl to find a way to help his family.

Karl first meets Max at a showing at his father’s art gallery. That day at school, Karl had been attacked by several older boys who beat him badly and push him down the stairs because of his Jewish ancestry. Max is the only one who questions Karl’s story that he got his injuries by falling down the stairs. He offers to train Karl is boxing in exchange for a painting of him that Karl’s father has in his possession. Karl does well in his boxing career until he faces off against one of the boys who beat him up at school. When it appears Karl will win the fight, during the German Youth Boxing Championship, the boy tells the judges that Karl is Jewish. Karl is disqualified from the tournament.

Meanwhile, Karl’s family life is in disarray. He had struck up a friendship with a non-Jewish girl that ended in the Stern family getting evicted from their home. Business for Karl’s father has been getting more and more sparse with one buyer even stealing a painting from Sig. Since his father is no longer able to earn a living through his art showings since Hitler has banned the art he prefers to sell, the family has moved into the art gallery. Because she looks Jewish, Karl’s sister, Hildy, is getting more and more abuse from the Germans. Finally, Karl’s father is badly injured and their home destroyed when Nazi followers go on a rampage, vandalizing and looting Jewish homes and businesses.

Karl hesitates to ask Max for help as he’s never been sure where the champion fighter stood politically but finally decides to make a trip to Max’s hotel. Max takes in Karl and Hildy, and helps locate their mother and father. While he was once Karl’s hero, Max becomes Karl and Hildy’s lifesaver as he pays their way to safety in America.

More summaries and resources for teaching or studying The Berlin Boxing Club.