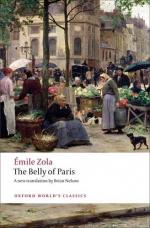 The Belly of Paris Summary & Study Guide includes comprehensive information and analysis to help you understand the book. This study guide contains the following sections:

This detailed literature summary also contains Topics for Discussion and a Free Quiz on The Belly of Paris by Émile Zola.

In December of 1851, Florent Quenu finds himself in the wrong place at the wrong time. Wrongly accused of participating in a plot to overthrow the government, Florent Quenu is deported to Devil's Island in Dutch Guiana. Eventually, Florent escapes from Devil's Island and makes his way back to Paris. Émile Zola's novel, The Belly of Paris, begins shortly after Florent returns to France. Riding into Paris in the back of a large produce wagon, emaciated and exhausted, the streets are unfamiliar to him and everywhere the character casts his eyes, Florent is surrounded by food. Consumerism in definitely on the rise in the Empire and throughout the course of the novel, Florent finds this penchant for devouring goods and services progressively more sickening and disappointing.

Eventually, Florent is reunited with his brother Quenu and Quenu's family. Florent settles into the bourgeois lifestyle rather uncomfortably, taking a job as a fish inspector at Les Halles. However, having a job and a regular middle-class life begins to wear on the character and after a short while, Florent begins to burn for revenge and decides that he must do something to strike back at the French Empire. Florent and several others in the Les Halle neighborhood begin devising a plot to overthrow the government.

The people in Florent's small world come from various different social strata and represent varying political sensibilities. Whereas Florent becomes immersed in politics and political thought, others in the neighborhood put a higher value on goods and services. In and around Les Halles, there are rich, well-fed people like the Quenus and there are poor ones, like Marjolin, Cadine, and the wicked gossip Mademoiselle Saget. The majority of the people in the Les Halles neighborhood are interested in acquiring as much as they can, keeping what they already have, and making certain that no one threatens their way of doing business. Above all, Lisa Quenu and her neighbors want to see to it that no one, even Florent, upsets the status quo in Les Halles.

The petits-bourgeois have a way of closing ranks in the face of a threat to their way of life. After all, those in power, no matter how limited their sphere of influence, are often most interested in maintaining and expanding that power. Florent Quenu is an idealist who believes that what is right is often what is best. Those around Florent, however, see him as an outsider and a troublemaker. In the end, it is not the authorities who manage to suppress Florent Quenu, but those in his own backyard who prove to be his most formidable opponents.

The Belly of Paris from BookRags. (c)2022 BookRags, Inc. All rights reserved.