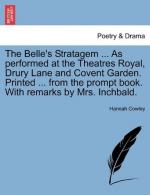 Books Like The Belle's Stratagem by Hannah Cowley | Suggested Reading

Hannah Cowley
This Study Guide consists of approximately 23 pages of chapter summaries, quotes, character analysis, themes, and more - everything you need to sharpen your knowledge of The Belle's Stratagem.

The Innocent Mistress, written by Mary Pix in 1697, is another remarkable eighteenth-century work by a woman. It is a comedy of intrigue that comments on love and courtship and the evils of marriages based on money.

The Busybody, written by Susanna Centlivre in 1709, is a noteworthy play by another eighteenth-century female dramatist. It is a conventionally structured comedy that comments on the inadequacies of marriage as an answer to women's problems.

The Times, written by Elizabeth Griffith in 1779, is a subtle, physical-comedy play by an eighteenth-century female dramatist who was a direct contemporary of Hannah Cowley.

The Runaway, written in 1776 by Hannah Cowley, represents Cowley's first substantial success as a playwright. It is a fresh, high-spirited comedy that was influenced, possibly even controlled, by David Garrick, who was an avid supporter of female dramatists in the late eighteenth-century.

More summaries and resources for teaching or studying The Belle's Stratagem.

The Belle's Stratagem from Gale. ©2005-2006 Thomson Gale, a part of the Thomson Corporation. All rights reserved.