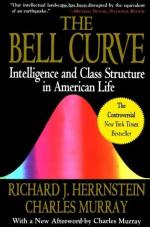 This detailed literature summary also contains Topics for Discussion on The Bell Curve: Intelligence and Class Structure in American Life by Richard Herrnstein.

The Bell Curve is one of the most controversial works of social science in the 1990s and perhaps from the 1990s to the present day. Its major concerns are those of the relationship between intelligence, genetics and social trends. The history of intelligence testing has occurred mostly in the twentieth century, but various social scientific ideological trends have turned against intelligence testing in recent decades in part because it seems to yield politically disturbing conclusions.

They also are that many important social problems are associated with low IQs, including crime, illegitimacy, divorce, poverty and bad parenting. It appears then that the major factor in most social problems in the United States is not a lack of government redistribution and social programs, latent or overt institutional discrimination or simply bad culture. Instead, most of these problems - not all - could be solved by raising the IQs of the least intelligent.

Perhaps the most controversial of the authors' findings is that the average African-American's IQ is a standard deviation - 15 IQ points - lower than the average European or Asian American. The authors also argue that this significantly lower IQ is not due to current racial discrimination, poor institutions, or past oppression. Instead, while they are tentative in their claims, they believe that low black IQ is genetic.

The authors argue that IQ is driving various important social trends that will have a serious impact on American life in the future. First, as intelligence testing improves, businesses have a reason to select more intelligent people for better jobs because they are more productive on the whole. As a result, the class of the most intelligent and the affluent class are merging. Further, due to the high level of mobility in the United States, the 'cognitive elite' is slowly isolating itself from the rest of society, not only geographically but socially and culturally as well. Finally, due to the fact that those with higher IQs have fewer children, the average American IQ is falling and thus the quality of life of the lower classes will fall as the future goes on.

The authors forcefully argue that these are trends that Americans must face head-on if they are to be effectively dealt with. They argue that affirmative action in college and in the workplace has been ineffective and that attempts to impose equality on the population have failed, only hurting the gifted. Instead, they argue for a return to classical liberal bourgeois values, an emphasis on individual responsibility and a scaled back welfare state in order to deal with present and forthcoming social problems tied to IQ.