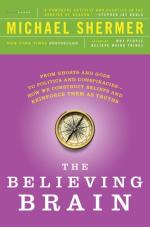 The Believing Brain: From Ghosts and Gods to Politics and Conspiracies---How We Construct Beliefs and Reinforce Them as Truths Summary & Study Guide

Michael Shermer
This Study Guide consists of approximately 30 pages of chapter summaries, quotes, character analysis, themes, and more - everything you need to sharpen your knowledge of The Believing Brain.

The Believing Brain: From Ghosts and Gods to Politics and Conspiracies---How We Construct Beliefs and Reinforce Them as Truths Summary & Study Guide Description

The Believing Brain: From Ghosts and Gods to Politics and Conspiracies---How We Construct Beliefs and Reinforce Them as Truths Summary & Study Guide includes comprehensive information and analysis to help you understand the book. This study guide contains the following sections:

This detailed literature summary also contains Topics for Discussion on The Believing Brain: From Ghosts and Gods to Politics and Conspiracies---How We Construct Beliefs and Reinforce Them as Truths by Michael Shermer.

"The Believing Brain" by Michael Shermer describes how the brain works in establishing its complex belief system. The book is launched by the stories of three individuals who changed their fundamental belief system based on a specific event or an epiphanic transformation. Chick D'Arpino's entire life was changed when he was contacted by an alien who delivered a message on how to save mankind. Shermer interviewed the man and was certain that there was no psychosis. The materialization of the alien visitor may have manifested from the stresses of a divorce, but it was real to D'Arpino who never stopped believing it. Dr. Francis Collins' conversion from atheist to Christian is a contrast to the third story, which is the author's account of his own conversion but his was from Christian to atheist.

Shermer goes on to explain the biology of belief and how the brain's belief system is formulated and established. It is through gathering information and forming patterns or paternicity that establishes the foundation for belief. Agenticity adds dimension to beliefs by the brain's process of interjecting "agents" that represent beliefs. According to Shermer, there is a neuron in the brain that enhances the belief process by producing excessive amounts of dopamine, a chemical that mimics the high that an individual experiences form drugs or sex. This feeling of pleasure is the carrot the brain holds out for the person to buy into a belief.

The reasons that people believe in the unseen are laid out by the author. The "unseen" includes everything from God and the Devil to Aliens and everything else in between. It is Shermer's conclusion that man created God and not the other way around. He describes the benefits that people receive from believing in the mysterious and unknown. He draws comparisons between God and Aliens since both are perceived to have intelligence far beyond that of man, are all powerful, and maintain a high level of mystery. Belief in conspiracy theories are also discussed and, like the invisible entities that people believe in, these conspiracies are rarely proven but live forever. Shermer makes the comment that often beliefs are established first and the brain is tasked with making them real. This system of belief is called belief-dependent realism or beliefs are made real by the brain attaching selected, cherry-picked evidence to support them.

The last section of "The Believing Brain," covers the role of science in belief. Through the ages, it has been science that has fought to find and learn the truth. However, mankind has resisted the truth at every turn. The brain struggles to always be right. All men, even scientists, fight new information if it doesn't match their established beliefs. The brain always wants to be right and it will do everything it can to prove that it is.

More summaries and resources for teaching or studying The Believing Brain: From Ghosts and Gods to Politics and Conspiracies---How We Construct Beliefs and Reinforce Them as Truths.

The Believing Brain: From Ghosts and Gods to Politics and Conspiracies---How We Construct Beliefs and Reinforce Them as Truths from BookRags. (c)2022 BookRags, Inc. All rights reserved.