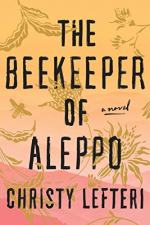 The Beekeeper of Aleppo Setting

Christy Lefteri
This Study Guide consists of approximately 39 pages of chapter summaries, quotes, character analysis, themes, and more - everything you need to sharpen your knowledge of The Beekeeper of Aleppo.

Nuri and Afra were born and raised in Syria. At the outset of the Syrian Civil War, they reside in Aleppo, which is one of the country’s largest and most populous cities. The violence of the war eventually devastates Aleppo and other regions of the country. After Nuri and Afra’s son Sami is killed by a bomb, Nuri and Afra decide to flee the country. Mustafa and his family have already fled the country by that point. Nuri and Afra hope to reunite with Mustafa in England.

After hiring a smuggler to take them out of Syria, Nuri and Afra arrive in the country of Turkey. There, they meet other refugees. Nuri meets a young Syrian orphan named Mohammed. Nuri quickly feels protective of the young orphan, who reminds him somewhat of Sami. Towards the end of the novel, Nuri eventually realizes (with Afra’s...

More summaries and resources for teaching or studying The Beekeeper of Aleppo.

The Beekeeper of Aleppo from BookRags. (c)2022 BookRags, Inc. All rights reserved.