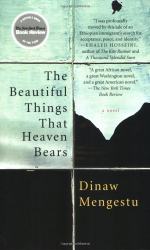 Dinaw Mengestu
This Study Guide consists of approximately 40 pages of chapter summaries, quotes, character analysis, themes, and more - everything you need to sharpen your knowledge of The Beautiful Things That Heaven Bears.

This detailed literature summary also contains Quotes and a Free Quiz on The Beautiful Things That Heaven Bears by Dinaw Mengestu .

The Beautiful Things that Heaven Bears, the award winning debut novel by Ethiopian immigrant, Dinaw Mengestu, opens with the main character, Sepha Stephanos and his friends hanging out at Stephanos' corner store in a Washington DC area known for its poverty. The men have a reoccurring game that they play, where one person names an African dictator and the others have to state the year that the dictator took power and what the name of the country currently is. The reader learns that all three men are from different parts of Africa, and all met when they worked for a hotel shortly after arriving in the U.S.

The men have known one another for 17 years now and have come a long way from those early beginnings at the hotel, where they worked as valets. Ken has become an engineer, Joe works at an upscale restaurant, and Sepha owns his own convenient store. The neighborhood where Sepha lives is called Logan Circle. At one time it was a collection of turn of the century mansions. Now, most of those larger homes have been converted into subsidized apartment buildings. There are still some of the houses that were never converted into other things, and it is one of these houses, located next door to Sepha's apartment building, that was purchased many months earlier by Judith McMasterson. The book offers the reader a glimpse into the past as Sepha recalls their first initial meeting and the days following it.

Judith was an American History professor, recently divorced, that had a bi-racial daughter named Naomi. Naomi, who was 11, had not taken the divorce well. Instead of staying at their newly renovated mansion in the DC neighborhood, Naomi preferred to go to Sepha's corner store and hang out there, talking about books. She had come in to see him every day after school. Judith had taken the year off, a sabbatical, in order to get her life back on track. Judith had invited Sepha to their home shortly after Thanksgiving for dinner. There was an immediate attraction between Judith and Sepha, and the evening ended with a gentle kiss between the two.

The next day Sepha told his longtime friends about Judith, who weren't surprised at the event, given that Sepha had done nothing but talk about her and Naomi. When he had seen Judith on the street the next day he suddenly became very shy. However, when Naomi came into the shop after school that day, Sepha felt more comfortable about the situation and began to allow himself the freedom to dream that they might all be a family some day. Naomi told Sepha about a book called The Brothers Karamazov by Dostoyevsky. Having recently lost her father in the divorce, Naomi easily gravitated towards Sepha as a replacement. It was a connection that Sepha had been missing since leaving Ethiopia, where much of his family still lived.

Not everyone at Logan's Circle was so accommodating or welcoming though. Many of the neighbors believed that soon they would be asked to leave because the upper class wanted to take back the old houses and restore them, just as Judith had. This urbanification, or gentrification, meant that they would not be able to afford to live where they do for much longer. They had seen Judith as a representative of this urban renewal and began to target her and Naomi.

Christmas arrived and Sepha was handed a sobering and stark dose of reality when he visited Judith and Naomi's home to celebrate. Stacked under the tree were loads of presents for Naomi, sent by her father who was teaching abroad. The obvious wealth was a shocking and glaring reminder to Sepha of the type of life he couldn't hope to offer either one of them. Instead of ending the evening with a kiss, he and Judith shook hands. Sepha was pretty sure this had ended their relationship.

Back in the present, the reader is introduced to Sepha's only relative living in the U.S., his Uncle Berhane, who had helped him to get a job when he'd first arrived in America. Sepha's first dose of America was sobering, and at one point, later, he thought about stealing money from his Uncle although he ultimately did not.

Reflecting back to his time with Judith, Sepha had realized after Christmas that he had behaved badly toward Judith and Naomi and arranged to bring them presents the following day. He was crushed when he received a letter telling him that both Judith and Naomi were going to be out of town to celebrate Christmas with her family out of the area. Despondent about the situation, Sepha had hired a prostitute, and afterwards, he gave her the presents he'd chosen for Judith and Naomi, telling the prostitute to give them to someone she cared about.

Mrs. Davis, one of the organizing women in Logan's Circle had informed Sepha and the other men that there would be a neighborhood meeting to discuss the evictions that had been rising, and the problem that the urban renewal would be going to pose to the "poor working folk." Sepha attended and was shocked to see Judith there. She offered him a seat, but he refused to sit next to her. The crowd was obviously hostile towards Judith, and before the meeting was over she left.

Early the next morning, Judith entered Sepha's store, a gift in her arms. It was a typewriter. Naomi had wanted Judith to bring it to him so that when she is gone, he could write to her. He asked Judith what she was talking about and she told him that Naomi would be attending a boarding school in Connecticut and that the neighborhood had become too dangerous for her to live in. The day before someone had smashed in her car window with a brick. More bricks were thrown at her home, breaking many of the lower floors' windows. However, impulsively, she told him that she wanted to still see him. She gave him a note from Naomi, who says that she really missed him.

Meanwhile, in the present, it is clear that Sepha's store is failing. Both Joe and Ken try to help him out, but Sepha's depression has made him neglect it. The reader learns that he is almost four months behind on the rent for the space. He receives an eviction notice on the same day that he learns that both Judith and Naomi have left Logan's Circle and will never return. They've left because a few days earlier, when they were out of town, someone had set fire to their townhouse and it had burned to the ground. Despondent, he decides to leave the city for a while. He goes to visit his Uncle in Maryland.

When Sepha arrives at his Uncle's place, he finds the apartment empty. He makes himself comfortable to wait for his Uncle's return and finds an old letter that his Uncle had written to President Carter back in the 1970s about the crisis in Ethiopia. His uncle had written about Sepha's father's brutal murder. The reader learns that Sepha has always felt responsible for his father's death. He believes that his father's arrest and execution were due to Sepha's affiliation with a group that opposed the Communist occupation and takeover. He decides he can't wait for his Uncle, and he leaves.

As he arrives back in DC, Sepha realizes that both he and Ken have modified their dreams since landing in America. All of them, initially, had said they would make good in America, then return to Ethiopia. Now, he realizes, none of them ever will. He has an epiphany and realizes that Naomi and Judith had been a chance at redemption for him, and that her example of starting over must be what he must do as well. For the first time since his father's death, Sepha feels that he can hear his father's voice in his mind telling him to pick up and start over. Sepha discards his stubbornly held notions of living in two worlds at the same time, embraces his new reality, and instead of going home, goes to his store with a spring in his step.

More summaries and resources for teaching or studying The Beautiful Things That Heaven Bears.