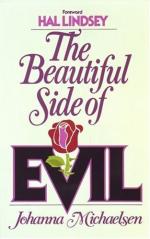 The Beautiful Side of Evil Summary & Study Guide

Johanna Michaelsen
This Study Guide consists of approximately 33 pages of chapter summaries, quotes, character analysis, themes, and more - everything you need to sharpen your knowledge of The Beautiful Side of Evil.

The Beautiful Side of Evil Summary & Study Guide Description

The Beautiful Side of Evil Summary & Study Guide includes comprehensive information and analysis to help you understand the book. This study guide contains the following sections:

This detailed literature summary also contains Topics for Discussion and a Free Quiz on The Beautiful Side of Evil by Johanna Michaelsen.

This autobiographical narrative is the story of the author's experiences with the occult. While the first three quarters of the book are taken up with details of those experiences, the final quarter consists of an intensely worded and deeply researched warning against the pervasive presence of the occult in contemporary society. Both sections of the book explore themes relating to the deceptive nature of occult practice, the necessity of adhering firmly to Christian faith, and the Bible as the only true source of inspiration for that faith.

The narrative begins with a vividly worded description of the author's increasingly desperate search for the home of Pachita, a psychic healer whom the author has been eager to meet for some time. Upon arriving at the house, the author is shown into Pachita's presence, where she learns it is possible that she (the author) is as powerful a psychic as the renowned Pachita.

The next several chapters relate how the author came to be at the point in her life where meeting Pachita became so important. She describes her family background (a turn-of-the-century female relative was, she says, a renowned psychic), her childhood encounter with what she portrays as a malevolent spirit, and her troubled adolescence (during which her interest in the occult triggered the general suspicion that she was a witch), and her deep faith in God and Christ. She then writes of her experiences at two different colleges, where she developed her interest in theater and the occult, where she became involved with drugs, and where two very different experiences with two very different young men led her to two very different changes in the direction of her life. During this time, she writes, her faith in God is what kept her safe from the influence of evil and also kept her searching for the truth. The final chapters of this section are taken up with a description of the author's experience with Mind Control, a technique built upon the premise that individuals can tap into the power of their own brains and develop psychic abilities. As a result of work with this program, the author writes, she became increasingly drawn to psychic healing, an interest which leads her to Pachita and to the belief that both her and Pachita's abilities are gifts from God.

The narrative then returns to the point from which it left off at the end of Chapter 1 - the beginning of the author's deepening relationship with Pachita. The author describes witnessing several of Pachita's apparently miraculous "operations", her own experience of seeking help in becoming a healer like Pachita, her frustration that that help doesn't come, and her growing doubts that Pachita's work is actually of God. She then writes of how her doubts led her to take some time away from Pachita, how that time away led her to understand that Pachita, her work, and indeed all forms of occult practices are actually manifestations of Satan and his desire to win control over humanity. She describes her process of renouncing all occult practices and embracing the teachings and influence of Jesus Christ in her life.

The final quarter of the book is taken up with the author's strongly worded warnings against the presence of occult practice in contemporary society. Illustrating her points with considerable amounts of quotation from the Bible and from other sources, she strongly suggests that Eastern spirituality, yoga, elements of popular culture, and even certain spiritual practices within the Christian church are actually occultist. She contends that only fully tested practices, considered in light of intense Biblical study and careful Biblical interpretation, can be regarded as truly Godly, and warns that unless an individual fully and unconditionally accepts the word, examples and teachings of Christ, that person's soul is lost to God and has become the property of Satan.

More summaries and resources for teaching or studying The Beautiful Side of Evil.

The Beautiful Side of Evil from BookRags. (c)2022 BookRags, Inc. All rights reserved.