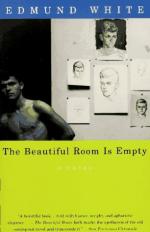 Related Topics
A Saint From Texas

Edmund White
This Study Guide consists of approximately 36 pages of chapter summaries, quotes, character analysis, themes, and more - everything you need to sharpen your knowledge of The Beautiful Room Is Empty.

The Beautiful Room Is Empty Summary & Study Guide includes comprehensive information and analysis to help you understand the book. This study guide contains the following sections:

This detailed literature summary also contains Topics for Discussion and a Free Quiz on The Beautiful Room Is Empty by Edmund White.

This novel is the story of a young gay man's coming-of-age in 1950's and 60's America, and in particular of his struggles to both suppress his sexual orientation and establish his career as a writer. While vividly detailing the specific circumstances and manifestations of that struggle, the narrative's central thematic concerns are universal such as the coming of age, the search for self-identity in the face of powerful societal pressure to conform, and the experience of being an outsider.

The first-person narrator begins his story with descriptions of his life at an upper middle class preparatory school and how he escaped its rules and constrictions, portrayed as extensions of those imposed by American society in general and his mid-Western parents in particular, to explore life as seen and lived by students at the art college across the way. He befriends several of its students, including the outspoken and bisexual Maria, with whom he quickly becomes particularly close despite his already present awareness that, in many areas of his life, he is an "outsider." Through Maria, he has his first encounter with a long-established homosexual couple, lesbians, Betts and Buddy, whom he and Maria view as living a foolish parody of heterosexual "normality." At the same time, the narrator also develops friendships with a male homosexual bookstore owner, Tex, who initiates him into physical sexuality.

After graduating from prep school, the narrator attends college, where he engages in increasingly frequent promiscuous sex, while working with an eccentric therapist on "curing" his homosexuality. His relationship with Maria continues, albeit at a distance, and he finds himself increasingly drawn to people who have detached themselves from parentally-imposed restrictions and who live with a kind of freedom he says he is desperate to realize for himself. Meanwhile, he is slowly coming to understand how emotionally empty and unsatisfying his promiscuity actually is, but is unable to stop.

In the summer between his first and second years of college, the narrator moves into his mother's Chicago apartment while she is in Europe. While there, he develops a relationship with Lou, a successful advertising executive who lives in the same building. Over time, Lou challenges various aspects of the narrator's self image as a writer, a man, and a homosexual. The narrator initially reacts negatively to those challenges, but after a while accepts Lou's guidance while, at the same time, becoming aware of Lou's human frailties.

After a few months, the narrator's mother returns, is informed of what her son has been doing, and immediately takes him to task for both acting on his inclinations and not working closely enough with his therapist. While the narrator agrees that she is right about his therapist, he also realizes he does not want to change as much as he thought he did, and that he does not believe the change his mother wants is either possible or desirable. So he stops working with the therapist and almost immediately enters into a relationship with a young man named Sean, who turns out to be almost as troubled by his orientation as the narrator is and who is eventually driven to end the relationship and moves back home. This, combined with other sobering and traumatic experiences, leads the narrator to once again consider entering into heterosexual marriage with Maria. He decides not to follow through, however, when he learns that Lou's similar attempt at marriage has failed drastically.

One night, drowning their sorrows in booze at a gay bar, the narrator and Lou are shocked when police officers conduct a raid. The bar's patrons, however, having had enough of the sort of societal oppression represented and practiced by the police, fight back. The narrator and Lou watch, simultaneously bemused and excited at what they see. The next morning however, they are not surprised to see that there is no mention in the newspapers of an event that they see as a profound expression of freedom and rebellion.

More summaries and resources for teaching or studying The Beautiful Room Is Empty.

The Beautiful Room Is Empty from BookRags. (c)2022 BookRags, Inc. All rights reserved.