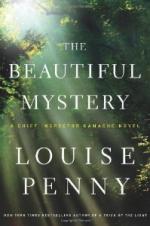 "The Beautiful Mystery" by Louise Penny is a novel which details the investigations of inspectors Armand Gamache and Jean-Guy Beauvoir into a murder at a monastery in Quebec.

Gamache and Beauvoir travel to the remote and secluded Saint-Gilbert-Entre-les-Loups in the wilderness of Quebec, to see about the murder of Prior Mathieu, the leader of the choir at the monastery. The monastery is home to twenty-four brothers, headed by Abbot Philippe. Philippe welcomes the investigators, who are the first nonreligious people to set foot in the monastery in hundreds of years. Though they believe in God, they are not clergy. Through a thorough investigation, they discover the monastery is split. The choir has produced a CD of beautiful Gregorian chants that has captivated millions worldwide. While some want to rush into their success, to repair their monastery and spread the Word of God, others are more conservative, and want to take things slowly. At last, it is revealed that the newest monk, Luc, is the murderer, having killed Mathieu because he wanted to modernize some of the music for the world, and Luc thought this an abomination.

At the same time, the Superintendent of the Surete du Quebec, Francoeur, arrives, and intends to sow indecision between Gamache and his partner, Beauvoir. This is done successfully, with Beauvoir becoming readdicted to pain killers given to him by Francoeur. Beauvoir, who is in love with Gamache's daughter, nevertheless leaves with Francoeur instead.