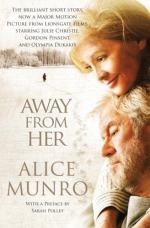 The Bear Came Over the Mountain Summary & Study Guide

Alice Munro
This Study Guide consists of approximately 23 pages of chapter summaries, quotes, character analysis, themes, and more - everything you need to sharpen your knowledge of The Bear Came Over the Mountain.

The Bear Came Over the Mountain Summary & Study Guide Description

The Bear Came Over the Mountain Summary & Study Guide includes comprehensive information and analysis to help you understand the book. This study guide contains the following sections:

This detailed literature summary also contains Quotes and a Free Quiz on The Bear Came Over the Mountain by Alice Munro.

The following version of this story was used to create this study guide: Munro, Alice. “The Bear Came Over the Mountain.” Carried Away, New York: Alfred A. Knopf, 2006. 513-559. Print.

The story opens when Fiona and Grant are attending the same university. Grant begins courting Fiona, and Fiona eventually suggests the idea of marriage. The narrative then shifts ahead about 50 years. Grant and Fiona are married, retired, and have been living in rural Ontario for the past 12 years. Fiona has begun to experience severe memory loss. Eventually, for Fiona’s safety, Fiona and Grant devise that Fiona should be checked in to a nearby assisted living center called Meadowlake. Grant is disallowed from visiting for one month after Fiona is checked in. The narrative reveals that over ten years ago, Grant committed multiple marital infidelities and eventually confessed them to Fiona. They then decided to retire early and move to rural Ontario.

During Grant’s first visit to Meadowlake, he sees that Fiona has lost all memory of him and has formed a close attachment with another resident, a man named Aubrey. Grant continues to visit regularly, but he decides to give Fiona and Aubrey space. The narrative then delves deeper into Grant’s infidelities and the effect they had of elevating his mental and physical wellbeing. Eventually, Aubrey is discharged from Meadowlake, which causes a sharp and progressive decline in Fiona’s physical and mental health.

Grant goes to Aubrey’s home and is allowed in by Aubrey’s wife Marian. Grant asks if Aubrey would be able to visit Fiona once per week. Marian does not assent, as she worries about Aubrey becoming dependent on Marian. If Aubrey were to become a permanent resident at Meadowlake, Marian would not be able to afford the cost. However, subtle romantic tension begins to develop between Marian and Grant, and Marian asks Grant on a date. Eventually, Marian agrees to let Aubrey visit Fiona. Fiona and Aubrey are both deeply pleased to be reunited.

More summaries and resources for teaching or studying The Bear Came Over the Mountain.

The Bear Came Over the Mountain from BookRags. (c)2022 BookRags, Inc. All rights reserved.