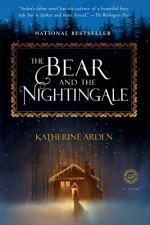 The Bear and the Nightingale Summary & Study Guide

Arden, Katherine
This Study Guide consists of approximately 57 pages of chapter summaries, quotes, character analysis, themes, and more - everything you need to sharpen your knowledge of The Bear and the Nightingale.

The Bear and the Nightingale Summary & Study Guide Description

The Bear and the Nightingale Summary & Study Guide includes comprehensive information and analysis to help you understand the book. This study guide contains the following sections:

This detailed literature summary also contains Quotes and a Free Quiz on The Bear and the Nightingale by Arden, Katherine .

The following version of this book was used to create this study guide: Arden, Katherine. The Bear and the Nightingale. Del Rey, an imprint of Random House. New York, NY. 2017. First edition.

The narrative spans a period of almost two decades in the life and maturation of Vasya, the daughter of an established landowner and his aristocratic, mystic wife. In addition to following Vasya’s story from her point of view, the narrative also frequently diverts into the points of view of other characters, making the development of the story and its themes multi-faceted, complex, and suspenseful.

The novel begins with a description of the circumstances of Vasya’s birth – specifically, of her being born in mid-winter, into a family with four other children, and to an unusual mother who died shortly after giving birth to a much longed-for daughter, one who Marina believed would be as spiritually and mystically endowed as her own mother, the first wife of the Russian Grand Prince. As Vasya matures, Marina’s beliefs about her seem to be coming true: the independent and adventurous girl communicates with spirits both of the household and of the woods, spirits whose existence and presence have been traditionally honored by individuals and the community for centuries.

The remarriage of Vasya’s father Pyotr to the emotionally unstable Anna changes Vasya’s life significantly. While Anna can see the same spirits that Vasya does, the deeply religious Anna sees them as demons. When a passionate, attractive young priest (Konstantin) arrives, to take over the responsibility for ministering to Pyotr’s family and the villagers for whom he is landlord and governor, Anna quickly seeks his help in both banishing the spirits and convincing those in the community who still believe in them to disavow their presence and importance. The fervent and arrogant Konstantin soon strikes the fear of God into those who still believe in the spirits: Vasya, however, fights him every step of the way, leading him into a complex net of feelings for her – resentment, desire, anger, and a hunger to control.

Meanwhile, Vasya undergoes a years-long process of awakening to herself and her abilities. She has several encounters with a powerful, mysterious man with several names and identities, including that of a stranger that gave Pyotr a pendant to give to the young Vasya on his behalf. That pendant was kept from Vasya by her nanny until she (Vasya) was mature enough to appreciate it, much to the disappointed anger of the mysterious man, who appears in the nanny’s dreams and who is at first believed to be a winter demon, but who is eventually revealed to be death himself.

Death, or Morozko as he is named in this story, seeks to engage Vasya and her power in a fight to repress and restrain his brother Medved, also referred to as the Bear and who, the narrative eventually reveals, is an embodiment of fear in the same way as Morozko is an embodiment of death. The conflict between the two rivalrous brothers, a conflict that includes Vasya, eventually climaxes when Konstantin sacrifices Anna’s life in an effort to gain the control over Vasya that Medved promised him. Medved gains the power that Morozko had been afraid of him gaining, but as the result of Pyotr giving his life, Medved’s brief assumption of great power is ended, and he is once again imprisoned.

In the aftermath of the final conflict, Vasya realizes that to keep what remains of her family safe and also to pursue her destiny, she has to leave. She takes her horse Solovey (a nightingale that the powerful Morozko had transformed into a horse) and rides off into the woods to seek, and live, her future.

More summaries and resources for teaching or studying The Bear and the Nightingale.

The Bear and the Nightingale from BookRags. (c)2022 BookRags, Inc. All rights reserved.