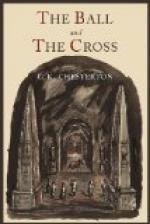 Plot Summary
+Chapters Summary and Analysis
Chapter 1: A Discussion Somewhat in the Air
Chapter 2: The Religion of the Stipendiary Magistrate
Chapter 3: Some Old Curiosities
Chapter 4: A Discussion at Dawn
Chapter 5: The Peacemaker
Chapter 6: The Other Philosopher
Chapter 7: The Village of Grassley-in-the-Hole
Chapter 8: An Interlude of Argument
Chapter 9: The Strange Lady
Chapter 10: The Swords Rejoined
Chapter 11: A Scandal in the Village
Chapter 12: The Desert Island
Chapter 13: The Garden of Peace
Chapter 14: A Museum of Souls
Chapter 15: The Dream of MacIan
Chapter 16: The Dream of Turnbull
Chapter 17: The Idiot
Chapter 18: A Riddle of Faces
Chapter 19: The Last Parley
Chapter 20: Dies Irae
Free Quiz
Characters
Symbols and Symbolism
Settings
Themes and Motifs
Styles
Quotes
Order our The Ball and the Cross Study Guide

The Ball and the Cross Summary & Study Guide

G. K. Chesterton
This Study Guide consists of approximately 63 pages of chapter summaries, quotes, character analysis, themes, and more - everything you need to sharpen your knowledge of The Ball and the Cross.

The Ball and the Cross Summary & Study Guide Description

The Ball and the Cross Summary & Study Guide includes comprehensive information and analysis to help you understand the book. This study guide contains the following sections:

This detailed literature summary also contains Quotes and a Free Quiz on The Ball and the Cross by G. K. Chesterton.

The following version of this book was used to create this guide: Chesterton, G.K. The Ball and the Cross. United States: Jefferson Publication, 2015.

The novel, as told from a third-person limited narrative point of view, opens in the midst of a discussion between two characters, Professor Lucifer and Father Michael, aboard Professor Lucifer's flying ship, a vessel he has invented himself. Professor Lucifer is a man of science and invention, while Father Michael is a devoutly religious monk, and the two are arguing about Father Michael's faith when they nearly run into the ball and the cross resting atop St. Paul's Cathedral in London, England. Tired of their argument, the professor pushes Father Michael out of his flying ship and leaves him on the roof of the cathedral, where he is found by a guard and taken to an asylum. As he is being escorted from the building, Father Michael sees a man also being apprehended by constables in the streets of London.

The man whom Father Michael sees being taken away by the police is a Scottish man named Evan MacIan. MacIan journeyed to London from his home in the Isle of Skye in the hopes of continuing his family's legacy as proud and noble Catholics willing to fight for the sake of their faith. When he arrives in the city he finds a shop called The Atheist, which is a publication run by Mr. James Turnbull. MacIan stops to read an article posted in the front window of the shop, and when he discovers Turnbull has blasphemed the Virgin Mary in his writing, he shatters the shop window with a rock. Mackan and Turnbull are then taken to the courthouse by the constables. At the courthouse, MacIan vows to challenge Turnbull to a duel if he is ever set free, and Turnbull replies by saying he will simply decline the duel and be labeled a coward. Hearing this, the magistrate allows both me to be set free, however immediately after the trial Turnbull approaches MacIan and tells him he would like to accept his challenge so that he can fight for the right of rationality and free-thought against the institution of religion.

The two men, knowing that if they are caught dueling they will be thrown into jail, run off to a curiosity shop to buy swords and duel in secrecy. When the owner of the shop learns of their intentions, the two men tie him up and commence their duel, however the shop owner is able to break free and alerts the authorities. MacIan and Turnbull are then sent on the run, and they flee from the city of London into the English countryside.

As they are continually chased by the constables through England in their attempt to carry out their duel, their story spreads to the newspapers and everyone seems to now know about their plight. However, as the two men work together toward their common goal, they find that they are beginning to grow friendly toward one another, and thus less inclined to actually duel. Still they continue onward, believing that the fight itself between science and religion is more significant than either of their own lives.

After escaping the authorities through and across villages and various different isles off the coast of Southern England, the two men find themselves in the seaside village of Margate, where during their escape they climb over a garden wall to find they have unwittingly entered an asylum. Because of the warrants for their arrest, the men are not allowed to leave the asylum, and are put into prison cells to ensure they do not escape. On the brink of madness in their cells, they discover a doorless third cell connected to MacIan’s, and when they look into it through a hole in the wall to find a mysterious old man shut into the room. Meanwhile, the head of the asylum, the Master, passes legislation that forces all citizens to prove their sanity, lest they be imprisoned in the asylum as well.

By the time MacIan and Turnbull are able to escape their cells, they find the asylum full of people who they have met during their journey who are now imprisoned because they have come into contact with the two men. It is revealed that the Master wants to erase the story of MacIan’s challenge from history because he is afraid that it will galvanize the cause of religion in society, which he desires to keep rationally and intellectually pure.

While everyone is trapped inside, one of the prisoners sets fire to the asylum, prompting the Master to flee with his doctors. MacIan and Turnbull, having now completely set aside their differences, rush to the prison cells to save the mysterious old man, however when they find him he is singing and laughing, shrouded in smoke. The roof collapses and a chasm of flames opens up in the hallway as the mysterious prisoner walks slowly toward the two men. They look up and see a flying ship lowering itself down toward the earth that drops the two doctors into the fire and flies away. MacIan claims that the men’s souls are not lost because they were not taken with the Master in his ship.

More summaries and resources for teaching or studying The Ball and the Cross.

The Ball and the Cross from BookRags. (c)2022 BookRags, Inc. All rights reserved.