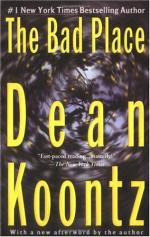 Dean Koontz
This Study Guide consists of approximately 49 pages of chapter summaries, quotes, character analysis, themes, and more - everything you need to sharpen your knowledge of The Bad Place.

This detailed literature summary also contains Topics for Discussion and a Free Quiz on The Bad Place by Dean Koontz.

The Bad Place, by Dean Koontz is the tale of Frank Pollard, a seemingly normal man with an extremely abnormal problem. Frank is unsure of who he is or what he does while he is asleep. Desperate for help Pollard turns to Bobby and Julie Dakota to help solve the mysteries in his life.

Frank Pollard wakes up in an alley, unsure of who he is, only that he is running from someone or something. Pollard makes his escape, barely, as a strange blue light destroys the area around him. Desperate to find the source of his amnesia and the strange things he finds when he wakes, Frank contacts Julie and Bobby Dakota, a married team of private investigators. The Dakotas take Frank's case, hoping that the mystery will bring them closer to realizing their dream of selling the agency and retiring young, able to enjoy their life together with Julie's brother Thomas.

The Dakotas investigate the fake identification that Frank carries with him, hoping to find some sort of history for the man. Meanwhile Frank is admitted to a hospital for tests to find out what he does while presumably sleep-walking. All members of the investigation team and Frank himself are in for a shock when it is discovered that Frank is not sleep-walking but telaporting. The fake IDs lead the Dakotas to brutally murdered families that may be connected to Frank in some way.

Bobby and Julie discover that Frank Pollard is in grave danger, and discover that this danger is in the form of Frank's brother, Candy. Candy has the ability to teleport as well, and he can track Frank by touching things that Frank has touched. In this way Candy follows Frank through time and space, trying to catch his brother and make him pay for the murder of their mother. Frank has been teleporting for years, hoping to stay clear of his brother. Due to the speed and frequency of his escapes, Frank has lost something of himself. Frank only remembers who he is and why he is running when hypnotized. During the session of hypnosis Frank becomes terrified and teleports, taking Bobby with him to all of the places he has tried to hide from his brother, the two most notable are another planet where engineered insects mine for red diamonds, and the study of Doc Fogarty who holds the key to the mysteries of the Pollard family. The horrors that Doc reveals in his matter of fact way, feeling no remorse for his part in the tale, horrify the Dakotas. It is at Doc Fogarty's house that Candy finally finds Frank and takes Julie Dakota, telling Frank he has fifteen minutes to return to their home and save her or he will kill her, as he has already killed so many tied to the Dokatas including Julie's brother Thomas.

Bobby and Frank rush to the Pollard home, with Bobby planning an end to Candy Pollard's years of destruction. The twins are present and it is their presence that gives Frank the opportunity needed. Frank senses his mother's presence and with horror Candy realizes that his beloved mother has been consumed by the pack of cats that always surround his sisters. Candy's fury at his sisters provides the time for Frank to grab his brother and they teleport rapidly, returning several times to reveal the horrific combination of the two men. At last they return a final time, fused into one being, a mass of tissue and bone that cannot sustain itself. Candy is gone, and Frank has sacrificed himself, giving meaning to his life.

Bobby and Julie Dakota retire to a small house, one they have dreamed of, but without Thomas, who has been killed by Candy Pollard in his search for Frank. The Dakotas live on the cash and red diamonds that Frank had collected through his teleportation. Though they miss Thomas, Julie and Bobby refuse to live in sadness as this would be disrespectful to Julie's kind-hearted brother. Their dreams have come true, but their lives will forever be tempered with sadness at the loss of their friends and loved ones.

More summaries and resources for teaching or studying The Bad Place.