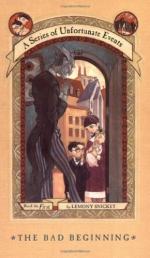 Lemony Snicket
This Study Guide consists of approximately 22 pages of chapter summaries, quotes, character analysis, themes, and more - everything you need to sharpen your knowledge of The Bad Beginning.

The Bad Beginning is told by a third person omniscient narrator. The narrator frequently makes asides to the reader, to integrate readers into the story. Insight is given ahead of time in many instances, as to what each particular character is thinking or planning.

In addition to asides, the narrator frequently encourages the reader to stop reading throughout the book. This first appears in the synopsis, at the very beginning of the book, and continues throughout the rest of the story. The narrator also brings in another story line, which begins to reveal more about the narrator and his involvement with the story of the Baudelaires. This story will become more frequent as the series progresses.

The book is set in a fictional city, one much like many cities throughout the United States and Europe. However, there are many aspects of the city that are...

More summaries and resources for teaching or studying The Bad Beginning.