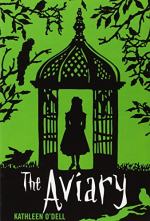 Kathleen O'Dell
This Study Guide consists of approximately 35 pages of chapter summaries, quotes, character analysis, themes, and more - everything you need to sharpen your knowledge of The Aviary.

The Aviary Summary & Study Guide includes comprehensive information and analysis to help you understand the book. This study guide contains the following sections:

This detailed literature summary also contains Quotes and a Free Quiz on The Aviary by Kathleen O'Dell.

Clara Dooley is a twelve year old girl that lives with her mother in Lockhaven, Maine, a seaport town. Due to a supposed physical condition, a weak heart, Clara is housebound in the Glendoveer mansion along with the owner, Mrs. Glendoveer, and the cook, Ruby. Clara’s mother, a nurse, takes care of Mrs. Glendoveer. The only place Clara is permitted to go outside of the house is into the rose garden where the aviary is located. The birds had belonged to Mr. Glendoveer, a magician that had died 30 years earlier. The birds, still precious to Mrs. Glendoveer, terrify Clara; they are loud and constantly screech at her.

Clara describes the Glendoveer mansion and her fascination with its fading beauty. Clara is so charmed by the house that she does not notice that much of it is falling apart. The Glendoveer mansion, arts and crafts in style, is decorated with souvenirs and intricacies from around the world, gathered by George and Cenelia Glendoveer on their travels. Clara loves every part of the house including the Italian murals, brightly patterned Persian carpets, and the intricate woodwork from Germany featuring exquisitely carved flowers and birds.

Clara, unable to attend school, spends a great deal of time in Mrs. Glendoveer’s bedroom, elegantly appointed with Chinese wallpaper, bric-a-brac, and a French green enamel stove. The house has some modern conveniences but still possesses gas lamps and wood and coal stoves.

Being confined to the house means that aide from her studies, Clara spends a great deal with time with Mrs. Glendoveer, who also serves as her teacher. Clara is kept under close surveillance and isn’t allowed to run or exert herself in any way. Clara longs to go outside and play, to go to school, and make friends her own age.

Clara shows a fascination for the rare birds and sea creatures in the books Mrs. Glendoveer uses to teach. Mrs. Glendoveer talks about the birds in the aviary and how much her late husband loved them. Clara is uncertain why anyone would love such noisy and contentious creatures, and she is concerned about Mrs. Glendoveer’s anxiety whenever the birds are upset. Clara and her mother constantly worry about Mrs. Glendoveer catching a cold, as she stands on the balcony to watch the birds. She laments not being able to go out into the garden to calm the birds.

During one of their afternoon talks, Mrs. Glendoveer tells Clara that she had a young son that had been kidnapped and had never been found. The story is almost mentioned in passing and Mrs. Glendoveer doesn’t seem to know what had happened or who might be responsible for the disappearance of baby Elliot.

Mrs. Glendoveer becomes ill and dies. Clara soon learns that there were four other Glendoveer children that had been kidnapped, along with Elliot, but that the four older children had drowned. According to Daphne, Clara’s new secret friend, the townspeople believe that Mr. and Mrs. Glendoveer had arranged for the kidnapping and murder of their own children. Clara finds letters and diary entries from Cenelia and George Glendoveer and becomes convinced that their former friend, Woodruff Booth, had a part in the kidnappings.

Clara and Daphne investigate the best they can with limited resources. One day, the birds begin to speak to Clara. They tell her to hurry and shout out Elliot’s name. Clara does not know what the birds are trying to say at first, yet their attempts at communication take away some of the fear Clara had felt toward them. Clara continues to investigate and learns that the birds are really the Glendoveer children. George had used an incantation to turn their souls into birds until the day Elliot would return.

Harriet, Clara’s mother, finally confesses that Clara is not ill but that she made up a lie to protect Clara from people that might choose to harm her. Harriet is worried that if people can link Clara to the Glendoveer fortune, she may also be in danger, just like the Glendoveer children. Clara learns that her father is really Elliot Glendoveer.

Daphne finds Mr. Booth and corresponds with him through letters. Daphne eventually persuades Booth to come to Lockhaven. Booth uses the ruse that an old friend has issued an invitation and that while he is in town, he will make the trip to meet with Daphne and Clara. Booth believes that Daphne and Clara have evidence that could tie him to the kidnappings and deaths of the Glendoveer children. The girls know that Booth is guilty and is coming to Lockhaven to find and steal any evidence linking him to the crime. The girls put a plan into action to stop Booth. By this time the birds are speaking quite fluently and agree to help Clara and Daphne catch Booth.

Booth arrives and attempts to steal the incriminating evidence from the girls. His henchman, Jimmy, is the man that kidnapped and raised Elliot as his son. After a struggle, Daphne and Clara manage to trap the men in the aviary. Frances and Arthur, the two middle children/birds, fly off to find Elliot.

Frances and Arthur locate Elliot on the island where he had been raised. Elliot is released from the spell that had been cast on him by Booth and returns home. The two men are arrested for their crimes and the entire story comes out about how Booth wanted the money from the ransom. Booth swears that the deaths were accidental.

Clara is desperate to find a way to return the birds to their former states and to allow them to fly off to be with Cenelia and George. Elliot takes a letter supplied by Clara and utters the incantation used by their father and releases his siblings from their avian prison. The children fly off to be with their parents.

Clara and her family, relieved to know the truth, plan their future together.

More summaries and resources for teaching or studying The Aviary.

The Aviary from BookRags. (c)2022 BookRags, Inc. All rights reserved.