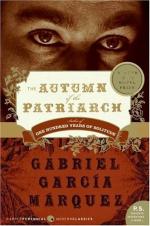 The Autumn of the Patriarch Summary & Study Guide

The Autumn of the Patriarch Summary & Study Guide Description

The Autumn of the Patriarch Summary & Study Guide includes comprehensive information and analysis to help you understand the book. This study guide contains the following sections:

This detailed literature summary also contains Topics for Discussion and a Free Quiz on The Autumn of the Patriarch by Gabriel García Márquez.

The dictator of a country on the Caribbean Sea in South America, the General, is dead and his palace is invaded. The vultures have invaded the palace when the dictator died, and then the common people follow in. The narrator reminisces about the life and times of the General. During a long series of wars, known as the Federalist wars, the General becomes the Head of State of the nation. He is also head of the Liberals and he is put into power with the help of the British Navy. Later the US marines occupy the country and finally leave. The occupiers leave because they are afraid of an epidemic of disease. The General is very close to his mother Bendicion Alvarado, and together with her, he occupies the Presidential palace. Later, she is sent to a suburban mansion, to keep her from making crude remarks about the General. The former occupiers have left the despot in place to run the nation and enjoy the whorehouse, as they say. The General does have thousands of concubines, and thousands of children by them, all who are born after seven months. He attacks the women and has sex with them with his clothes on when he wants one of them.

Bendicion Alvarado, the General's mother, dies, and her body is displayed all over the nation. The General demands that she be canonized as a Saint. Despite the General's best effort, the pope's representatives refuse to canonize the General's mother and the General expels all the Catholic clergy from the nation. The General notices a young novice nun, Leticia Nazareno, as she is expelled. She is later kidnapped and becomes the General's lover, and then wife and mother of his only legitimate child, Emanuel. The clergy and the church are brought back, but Leticia becomes more and more greedy, plus she brings her greedy family to the country. Finally, Leticia and the child are assassinated.

The General is old and weak, but still wants to get revenge on members of his High Command and other conspirators in the assassinations. Finally, the General hires a torturer and assassin from the old feudal regime, Jose Ignacio Saenz de la Barra. Jose kills many people and sends their skulls to the General, which are first mistaken for coconuts. Jose eventually sets up a torture center and has more power than the General. The General is able to outfox Jose by appealing directly to the people, and has the mob kill Jose. Then the General forms a new civilian regime. Now the General is very old, but is usually undisturbed and allowed to play various sexual and other games, including those with school girls. His last complaint is that he is forced to sell the Caribbean Sea. A company sections it off and ships it to Arizona. The General is mostly ignored after that, except that he still occasionally commits unnecessary crimes against innocent people. The General finally dies, and the mob invades the palace. The people celebrate the ending of an era.