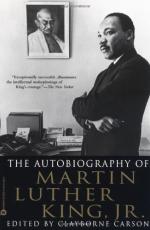 The Autobiography of Martin Luther King, Jr Topics for Discussion

How did King struggle with his faith? What were his major challenges? How did he come to keep his faith?

What exactly was King's philosophy of nonviolent resistance? Who did he learn it from and what were some challenges made to it?

Please explain the events that led up to Montgomery desegregating buses.

What does King think that connection is between racial equality, aiding the poor and fighting for peace?

Do you think King was right to pursue nonviolence? Or do you think Malcolm X had the right idea in advocating for violent resistance?

Please give one of the main arguments of Letter from a Birmingham Jail. Explain its context and its force. Do you agree or disagree with it?

Was King right to return to Birmingham against his family's wishes? Defend your answer.

More summaries and resources for teaching or studying The Autobiography of Martin Luther King, Jr.