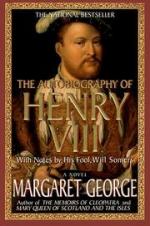 The Autobiography of Henry VIII: With Notes by His Fool, Will Somers: A Novel Summary & Study Guide

Margaret George
This Study Guide consists of approximately 38 pages of chapter summaries, quotes, character analysis, themes, and more - everything you need to sharpen your knowledge of The Autobiography of Henry VIII.

The Autobiography of Henry VIII: With Notes by His Fool, Will Somers: A Novel Summary & Study Guide Description

The Autobiography of Henry VIII: With Notes by His Fool, Will Somers: A Novel Summary & Study Guide includes comprehensive information and analysis to help you understand the book. This study guide contains the following sections:

This detailed literature summary also contains Topics for Discussion and a Free Quiz on The Autobiography of Henry VIII: With Notes by His Fool, Will Somers: A Novel by Margaret George.

The book opens with a series of letters between Will Somers - the "fool" from Henry VIII's court - and Catherine Knollys. The two are apparently well acquainted, and Will gives Catherine the news that she is the illegitimate child of Henry VIII. Catherine is angry and denies that it is true. Will counters that Catherine is "prejudiced and stupid." Though she says she doesn't want the journal, Will sends it anyway.

The journal begins with Henry's admission that someone had asked him to detail his earliest memory. He thinks back and is soon lost in the story of his life. He recalls being knighted at age three, which was his father's attempt to assure that the family has a strong hold on the throne. Henry knows that his older brother, Arthur, will some day reign while he himself will likely be relegated to a religious station. But Arthur dies and Henry becomes heir to the throne. Henry is soon betrothed to Katherine, Arthur's widow, who has sworn that her marriage to Arthur was never consummated. Though Henry's father swears the actual marriage will never take place, Henry weds Katherine soon after his father's death. The couple have one daughter who survives infancy, and Henry soon becomes enamored with another woman, prompting his attempts to have his marriage to Katherine annulled on the grounds that she was - in all senses of the word - his brother's wife. It's six years before that occurs and Henry immediately remarries.

Over the course of his life, he marries six times. His final marriage, to Katherine Parr, remains intact upon his death, though Henry makes a veiled reference that he couldn't hold Katherine. Henry also has several children, including an illegitimate son named Henry Fitzroy who dies as a young man and one legitimate son, Edward, by his beloved Jane. Jane dies soon after giving birth and Henry grieves for her always.

Of his wives, Anne troubles him most and he comes to believe her to be a witch. When Henry - always robust and healthy - develops a sore on his leg that leaves him paralyzed with pain and unable to function for months on end, he comes to believe that it's Anne's doing. When his first wife (now living as princess dowager) falls to a strange illness and dies, and two of his children fall strangely ill at the same time he battles the ulcer on his leg, Henry comes to believe Anne is poisoning them all. She is soon beheaded for treason.

Henry himself falls ill to a malady that makes it impossible for him to dispel fluids. It's noted by Henry's jester, Will, that Henry fell in and out of lucidity in his final months and was in such poor health that he had to be placed in bed with a special sling.

The Autobiography of Henry VIII: With Notes by His Fool, Will Somers: A Novel from BookRags. (c)2022 BookRags, Inc. All rights reserved.