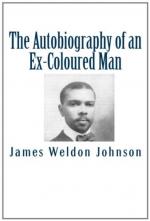 The Autobiography of an Ex-Coloured Man Summary & Study Guide

The Autobiography of an Ex-Coloured Man Summary & Study Guide Description

The Autobiography of an Ex-Coloured Man Summary & Study Guide includes comprehensive information and analysis to help you understand the book. This study guide contains the following sections:

This detailed literature summary also contains Topics for Discussion on The Autobiography of an Ex-Coloured Man by James Weldon Johnson.

The Autobiography of an Ex-Colored Man was first published anonymously in 1912, which made it appear an authentic autobiography. It is, in fact, a fictitious work by James Weldon Johnson, a writer, musician, and activist. The novel was published again in 1927 under the author’s own name. While the unnamed narrator, the ex-colored man, shares some characteristics with Johnson, it is not representative of the author’s life. The novel remains one of Johnson’s most influential works.

The narrator starts his story during his childhood with his mom and occasional visits by a White gentleman in Georgia. For reasons unknown to him until years later, his mom moves them to Connecticut where he lives a comfortable existence, attending school and reading and playing music in his spare time. At school the boy excels in his studies but doesn’t have many friends other than his best friend “Red,” nicknamed for his red hair. One fateful day in school, the principal comes in to his classroom and asks the White students to stand. When the narrator stands, the principal tells him to sit down and stand when the Black students are asked to. The narrator is shocked by the realization he is part Black, even though other students said they already knew. This makes it more difficult for him to make friends because now he is unsure with whom he should associate. “Red” stays his best friend, unconcerned about race.

Even though his mother confirms the narrator’s mixed race, she doesn’t mention who his father is until his father visits them in Connecticut a few years later. He is the same gentleman visitor from the boy’s childhood in Georgia. The boy learns that while his father loved his mother, he chose to marry a White woman, feeling constrained by social pressures of the time. The boy sees his father only once more in his lifetime.

While the boy is in high school, his mother gets sick and dies. Because his college fund is used to pay for her medical bills, he decides to go to affordable Atlanta University. He also hopes to learn about Southern Black culture there. The day after he arrives, his college savings are stolen and, out of shame, the young man leaves for Jacksonville, Florida, where he can make his last few dollars stretch and find a job. He stays in Jacksonville for three years as a cigar roller and enjoys his time there. He is about to settle down and get married when the factory closes and he follows some co-workers to New York instead to find work.

The narrator is introduced to gambling houses and music clubs upon arriving and immediately becomes addicted to both. He nearly loses all of his money through gambling when he gives it up and gets a job as a piano player at the club he frequents. It was at that club he first heard ragtime and subsequently decides to devote himself to playing this original Black music.

When a murder occurs at the club at which he works and the young man fears he may be murdered too, he runs away and is saved by one of the club’s wealthy White patrons when he asks the narrator to accompany him to Europe where he can play piano at the patron’s parties. They leave immediately for Europe and stay there several years, becoming good friends. When, at a party full of musicians, the narrator becomes inspired again to play and popularize ragtime, thereby bringing pride to the Black race, he tells his wealthy friend he needs to live this life of comfort to fulfill his dreams.

When the man arrives in the South, he listens to many sermons and spirituals in the church, developing material for his future song compositions. As soon as he is about to start writing, he witnesses the public burning of a Black man. At that point, he immediately relinquishes his dreams to bring glory to his race by writing and playing Black music. He moves to New York where he changes his name and his appearance and spends the rest of his life as a well-to-do White man, with a wife and two children. At the end of the novel, the narrator acknowledges the tough decision he made. While he doesn’t regret his choice, he also admits he gave up his life’s ambitions and a large part of his heritage to become “a successful white man who has made a little money.”