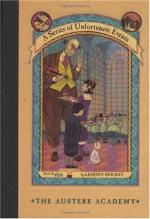 Lemony Snicket
This Study Guide consists of approximately 31 pages of chapter summaries, quotes, character analysis, themes, and more - everything you need to sharpen your knowledge of The Austere Academy.

This detailed literature summary also contains Topics for Discussion and a Free Quiz on The Austere Academy by Lemony Snicket.

The Austere Academy is a school that most children would dread. It is entirely grey and devoid of any character. However, the characters in the story provide their own unique coloration to this dull place. An entirely new group of characters are introduced in this story, starting with Principal Nero.

The Baudelaires find that they are once again in the care of an adult who doesn't have the slightest clue as to how to take care of children. Nero fancies himself a genius and spends his time torturing children and playing the violin. Sunny gets stuck with the worst lot and ends up having to become his secretary.

The children are forced to live in a horrible shack and are deprived the use of a library for the first time in this series. However, this void is filled with the introduction of two actual friends for the Baudelaires. Up to this point, the children had been lacking any sort of friends that were their own age and Isadora and Duncan Quagmire are an interesting addition.

Like many schools, Prufrock Prep is filled with nasty children, but there are none quite as nasty as Carmelita Spats. This particular child takes it upon herself to make the Baudelaires even more miserable and helps the new gym teacher further torture them. The school's new gym teacher, Coach Genghis, wears a turban and high-top running shoes. This is, of course, a new disguise for Count Olaf, but his initial plan is not clear to the Baudelaires. Instead of trying to kill them, he simply makes them run around in a circle every night.

However, this soon wears the children down and their new friends vow to help them figure out what Count Olaf is up to. The Quagmires research the problem for their friends as the Baudelaires run until dawn. Their schoolwork begins to suffer and Nero announces they will have to take a quiz. If they fail, they will be expelled and placed in the care of Coach Genghis.

Finally, Count Olaf's plan has become clear to the children, but there doesn't seem to be much they can do to thwart him. There are no adults that the children can go to for help and Mr. Poe is unreachable. Once again, it is up to the children to solve their own problem. Unfortunately, running all night and staying awake all day precludes them from studying for their exam and their world starts to look even bleaker.

However, the Quagmires come up with a plan to help their friends. Will it be successful, or will Count Olaf finally gain the upper hand over the Baudelaires? The Quagmires have just gotten themselves into more trouble than they ever could have imagined.

More summaries and resources for teaching or studying The Austere Academy.