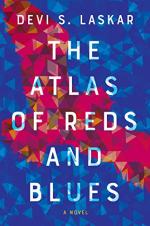 The Atlas of Reds and Blues Summary & Study Guide

Laskar, Devi S.
This Study Guide consists of approximately 33 pages of chapter summaries, quotes, character analysis, themes, and more - everything you need to sharpen your knowledge of The Atlas of Reds and Blues.

The Atlas of Reds and Blues Summary & Study Guide Description

The Atlas of Reds and Blues Summary & Study Guide includes comprehensive information and analysis to help you understand the book. This study guide contains the following sections:

This detailed literature summary also contains Quotes and a Free Quiz on The Atlas of Reds and Blues by Laskar, Devi S. .

The following version of this book was used to create this study guide: Laskar, Devi S. The Atlas of Reds and Blues. Berkeley: Counterpoint, 2019. Hardcover.

The novel’s unnamed protagonist is an American-born woman of Indian descent. She lives in North Carolina, and the narrative conveys events from her life in a nonlinear fashion. The story begins at the end of her life. At the age of 43, she is murdered by police in her own driveway, despite being an innocent and law-abiding citizen. The narrative then provides a series of nonlinear vignettes that give the reader both a general and specific picture of her life. She was born in North Carolina and loved almost her entire life there. However, she frequently experienced racial prejudice from the predominantly white populace, many of whom refused to believe that she was an American citizen.

The protagonist worked as a journalist. She was originally a crime reporter, which she enjoyed very much. However, due to racial prejudice on the part of her employer, she was eventually demoted and was given less interesting assignments. She was married to a Caucasian man, and they had three daughters together. The daughters were often teased and bullied at school due to their ethnicity. The protagonist’s husband held socially progressive views. However, he was often out of town on business, thereby saddling the protagonist with all of the domestic and child-rearing duties. Whenever the protagonist was pregnant, other residents of the town often felt entitled to offer her unsolicited advice on how to be a good spouse/mother.

The protagonist had a somewhat strained relationship with her own parents. The protagonist lived and worked in a different state for a period of time, but she moved back to North Carolina to help take care of her mother after her mother became ill. After the protagonist married and had children, her parents began to call her on the phone almost every day in order to offer unsolicited parenting advice. As stated above, the protagonist’s daughters experienced bullying at school. One day, a group of bullies beat up the protagonist’s middle daughter, giving he a concussion, but the school took no action against the bullies.

More summaries and resources for teaching or studying The Atlas of Reds and Blues.

The Atlas of Reds and Blues from BookRags. (c)2022 BookRags, Inc. All rights reserved.