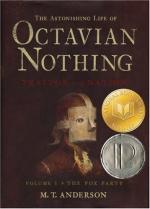 The Astonishing Life of Octavian Nothing, Traitor to the Nation, Vol. 1: The Pox Party Quotes

Matthew Tobin Anderson
This Study Guide consists of approximately 29 pages of chapter summaries, quotes, character analysis, themes, and more - everything you need to sharpen your knowledge of The Astonishing Life of Octavian Nothing, Traitor to the Nation, Vol. 1.

"I did not ask why we were not numbered, as the others were; I suspected that it was due to my mother's royal blood - for I was told from my earliest youth that she was a princess in her own kingdom, could she but get back to it from her exile" (Part I, p. 8).

"As with so many elements of my upbringing, it took me some time to appreciate what thought had gone into the regulations by which I was raised, and the extreme purity and inviolability of their conception" (Part I, p. 29).

"Latin and Greek were taught me by Dr. Trefusis, 09-01, the aged philosophe. In his youth, he had been welcomed at the courts of Versailles and Sansouci" (Part I, p. 58).

"I gave little thought to the debates regarding taxation by our Parliament. When the King's ministers demanded that the Colonies pay the costs of...

More summaries and resources for teaching or studying The Astonishing Life of Octavian Nothing, Traitor to the Nation, Vol. 1: The Pox Party.

The Astonishing Life of Octavian Nothing, Traitor to the Nation, Vol. 1: The Pox Party from BookRags. (c)2022 BookRags, Inc. All rights reserved.