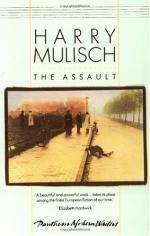 Harry Mulisch
This Study Guide consists of approximately 33 pages of chapter summaries, quotes, character analysis, themes, and more - everything you need to sharpen your knowledge of The Assault.

Anton takes a novel by a Haarlem writer as a gift for a friend's birthday. This birthday party brings Anton back to Haarlem for the first time since his family was killed.

As Anton talks with Karin Korteweg in 1981, he reads the slogans on protest signs all around them. It is a demonstration against nuclear weapons, and Anton finds the slogans fascinating even as he learns the final details of his own family's death in 1945.

Takes has kept the gun Truus Coster used to kill Fake Ploeg with for twenty years, despite laws that require him to give up the gun or have it rendered unusable. Anton sees this gun when he visits with Takes to see a picture of Truus.

Anton decides he needs to see a picture of Truus in order to prove to himself she looks nothing like...

The Assault from BookRags. (c)2022 BookRags, Inc. All rights reserved.