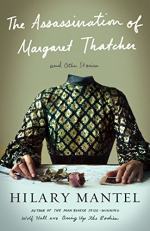 Plot Summary
+Chapters Summary and Analysis
Sorry to Disturb – Comma
The Long QT – Winter Break
Harley Street – Offenses Against the Person
How Shall I Know You? – The Heart Fails Without Warning
Terminus – The Assassination of Margaret Thatcher: August 6th, 1983
Free Quiz
Characters
Symbols and Symbolism
Settings
Themes and Motifs
Styles
Quotes
Order our The Assassination of Margaret Thatcher Study Guide

Hilary Mantel
This Study Guide consists of approximately 31 pages of chapter summaries, quotes, character analysis, themes, and more - everything you need to sharpen your knowledge of The Assassination of Margaret Thatcher.

The Assassination of Margaret Thatcher Summary & Study Guide includes comprehensive information and analysis to help you understand the book. This study guide contains the following sections:

This detailed literature summary also contains Quotes and a Free Quiz on The Assassination of Margaret Thatcher by Hilary Mantel.

The Assassination of Margaret Thatcher is a collection of short stories by Hilary Mantle. Each story is an independent narrative; however, the stories do share themes including friendship, marriage, appearance, and free will. The element of surprise is very much a part of each one, too.

“Sorry to Disturb,” tells about a married woman who is dealing with unwanted advances from a Muslim man who has intentions of marrying her.

In “Comma,” two children discover a deformed child and learn how appearances are not always as they seem.

In “The Long QT,” an undiagnosed heart condition claims the life of a married woman the second she discovers her husband is planning an affair.

A married couple in "Winter Break" unwittingly become a party to a murder when they cover up the crime. They cover it up because they don't want its occurrence to ruin their vacation.

In “Harley Street,” a receptionist who likes to know about all the happenings in a doctor's office cannot see that all of the patients are vampires.

“Offenses Against a Person" is the story of a seventeen year-old girl who watches as her father divorces her mother for a younger woman, only to repeat his behavior with another younger woman.

In “How Shall I Know You?” an over-the-hill writer condescendingly and cruelly leaves a twenty-pound tip for a deformed teenage girl who works at the inn where she is staying, only to have to the favor returned months later, leaving the writer wondering which of her flaws elicited the cruel gesture.

In “The Heart Fails Without Warning” a girl suffering from anorexia dies of a weakened heart, and serves as a metaphor for her own family, which is weakening from a metaphorical heart.

In “Terminus”, a young man attempts to track down the ghost of his father on a train, only to realize that in the end, no matter where people travel, or what they do in life, everyone is headed for a terminus of some kind, with the ultimate terminal being death.

“The Assassination of Margaret Thatcher” lends its title to the front cover of the book. The narrative tells about a woman’s apartment being taken over by an IRA assassin who kills the prime minister, Margaret Thatcher. The woman whose apartment is invaded ends up helping the assassin to plot an escape –even though she believes that violence never solves anything.

More summaries and resources for teaching or studying The Assassination of Margaret Thatcher.

The Assassination of Margaret Thatcher from BookRags. (c)2022 BookRags, Inc. All rights reserved.