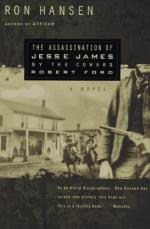 Ron Hansen (novelist)
This Study Guide consists of approximately 36 pages of chapter summaries, quotes, character analysis, themes, and more - everything you need to sharpen your knowledge of The Assassination of Jesse James by the Coward Robert Ford.

The Assassination of Jesse James by the Coward Robert Ford Summary & Study Guide includes comprehensive information and analysis to help you understand the book. This study guide contains the following sections:

This detailed literature summary also contains Topics for Discussion and a Free Quiz on The Assassination of Jesse James by the Coward Robert Ford by Ron Hansen (novelist).

Jesse James is a notorious outlaw who, with his brother Frank, makes up the core of the James Gang. Other members of the gang vary depending on the job and who is available, but usually include an array of cousins and friends. As Frank and Jesse make plans to rob a train on September 7, 1881, they are joined by Charley Ford, a man who is sometimes included in the illegal activities. It's here that they first meet Robert "Bob" Ford. Frank isn't impressed with Bob but Jesse seems to like the young man. Bob is a huge fan of Jesse and knows everything about him from reading books and newspaper accounts of Jesse's activities. Bob spends some time with Jesse but lives most of the time with his widowed sister, Martha Bolton. Meanwhile, Jesse's reputation with the people is somewhat favorable but the government and law enforcement are berated for allowing the tyranny of Jesse James go on for so long. When the governor offers a large reward for the capture or death of Jesse, several members of the gang are interested in the possibility of collecting. Ed Miller confides in Bob Ford that he's been talking to others about the possibility of capturing Jesse James.

Meanwhile, other members of the gang are going about their daily lives. Woodson Hite, known as Wood, is Jesse's cousin. He and another gang member, Dick Liddil, go to visit Wood's father and stepmother. Dick has an affair with Wood's stepmother and the two men clash over it. Wood kills a servant who knows about the affair and when Dick and Wood meet up later at Martha's house, a gunfight erupts. Bob steps in and kills Wood but Dick is injured. Those at the house know they can't tell Jesse that they've killed his cousin and so they hide the body. Jesse suspects Dick and puts a reward on his head, both for Wood's death and for the possibility that he's planning to turn Jesse in for the reward money. Bob and his brother, Charley, meet with the governor and agree to turn in members of the gang, including Jesse and Dick Liddil. Dick is taken into custody immediately.

As Jesse plans another bank robbery, he's joined by Bob and Bob's brother, Charley. The two men are in Jesse's house on a Monday morning when Jesse leaves his guns on the bed, moving some distance away. Bob sees his chance and shoots Jesse, who is unarmed and apparently unaware, killing him instantly. Bob and Charley turn themselves in, confident that the governor will pardon them, which he does.

Bob expects accolades and wealth as the result for being the man to kill Jesse James but the governor's reward turns out to be only two hundred, fifty dollars each for Bob and Charley. They are pardoned for their past crimes but the brothers are broke and at odds. Charley eventually commits suicide but Bob goes on to start several successful businesses, including a gambling house in Creede, Colorado, following a silver strike there. It's there that he meets up with a man named Soapy Smith who kills Bob in cold blood, apparently looking for the same glory Bob had sought when he set out to kill Jesse James.

More summaries and resources for teaching or studying The Assassination of Jesse James by the Coward Robert Ford.

The Assassination of Jesse James by the Coward Robert Ford from BookRags. (c)2022 BookRags, Inc. All rights reserved.