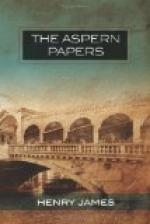 This detailed literature summary also contains Quotes and a Free Quiz on The Aspern Papers by Henry James.

The story’s unnamed narrator is an American literary critic and editor. The narrator’s literary and professional interests are largely oriented around renowned American poet Jeffrey Aspern, who died decades earlier. The narrator travels from America to Venice, Italy, as that is where a woman named Juliana Bordereau lives. Juliana, now a very old woman, was Jeffrey Aspern’s lover when Aspern was alive. The narrator believes that Juliana may possess letters from Aspern, although she does not seem willing to part with them or show them to other people.

The narrator arrives at Juliana’s home and presents himself under a fake name. The house is palatial but desolate and neglected. The only people inside are Juliana, her middle-aged grand-niece Tita, and their maidservant Olimpia. Without revealing his identity or his interest in Aspern, the narrator says that he is an American scholar who wishes to pay for lodging in the house. Juliana accepts the proposal and charges the narrator a high price. Tita informs the narrator that Juliana wants the money so that she has money to leave to Tita when Juliana dies.

Over the next three months, the narrator makes no progress in attempting to win the Bordereaus’ favor. Juliana and Tita are highly reclusive. The narrator pays to have the house’s outdoor garden revitalized, and one day, he encounters Tita in the garden. He finds Tita to be fairly innocent and simple-minded. He reveals some elements of his true identity to her and expresses his interest in Aspern. Soon after, Juliana calls on the narrator to converse with him. It is unclear to him whether Juliana has discerned his true motives. A few days later, the narrator and Tita go on a gondola ride together. He tries to enlist Tita to his mission of obtaining the letters. Tita affirms the letters’ existence and says that she will try to help the narrator, but she also says that she is generally unable to disobey Juliana.

Later, the narrator informs Juliana that he is a literary critic, editor, and historian. Juliana responds by saying that it is wrong to scrutinize the past. Juliana then presents the narrator with a portrait of Jeffrey Aspern, but the narrator pretends that he does not know of Aspern. Eventually, Juliana falls ill. The narrator considers searching her room while she is asleep. He at first views the idea as morally repugnant, but he ultimately gives into temptation and searches the room for the letters. He does so when it seems that Juliana is asleep, but Juliana catches him in the act.