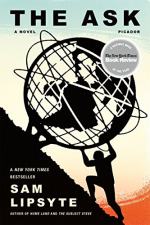 Get The Ask from Amazon.com
View the Study Pack
Study Guide
Order our The Ask Study Guide

Sam Lipsyte
This Study Guide consists of approximately 40 pages of chapter summaries, quotes, character analysis, themes, and more - everything you need to sharpen your knowledge of The Ask.

The Ask Summary & Study Guide includes comprehensive information and analysis to help you understand the book. This study guide contains the following sections:

This detailed literature summary also contains Quotes and a Free Quiz on The Ask by Sam Lipsyte.

The following version of this book was used to create this study guide: Lipsyte, Sam. The Ask. New York: Farrar, Straus and Giroux, 2010.

The novel takes place in New York City. The protagonist and narrator, Milo Burke, works in the fundraising department of a mediocre university. He finds the job unfulfilling. When he was younger, he had aspired to be a successful painter. Milo is married and has a toddler son named Bernie. Milo and his wife Maura have been growing emotionally distant from each other. One day, at work, Milo yells angrily at a student and is fired. However, soon after, Milo is offered his job back if he is able to secure a large donation from the wealthy Purdy Stuart. Milo and Purdy were friends in college, after which time Purdy became a highly successful businessman. Purdy is interested in donating to the university because his wife Melinda enjoyed taking classes there, and Purdy specifically requests Milo as the point of contact.

Milo and Purdy have their first meeting over lunch in the city, but Purdy makes no firm commitments regarding a donation. Because Milo has nothing to do between meetings with Purdy, he fills his time by taking care of Bernie. Based on certain things that Bernie says, Milo begins to wonder if Maura is having an affair with a coworker of hers named Paul. Milo’s next meeting with Purdy is late at night. During the meeting, Purdy says that he has an illegitimate son, Don Charboneau, who recently tried to contact him for the first time. Purdy’s wife Melinda recently became pregnant for the first time, and he does not want Melinda to find out about Don. Purdy asks Milo to be the point of contact between himself and Don, and Milo accepts, hoping that his cooperation will be rewarded with a donation from Purdy. The next day, Milo goes to Don’s apartment with bribe money supplied by Purdy. Don is an angry Iraq War veteran who has PTSD and who lost both legs in Iraq. Milo gives him the money, but Don implies that he wants direct contact with Purdy.

At home, Milo obliquely broaches the subject of Paul while talking to Maura. Maura’s responses seem to affirm Milo’s suspicions that Mara is having an affair with Paul. Milo leaves the apartment, and one of his coworkers lets him sleep at their apartment for the night. The next day, as instructed by Purdy, Milo meets with Purdy’s lawyer, Lee Moss. Lee Moss tells Milo to offer Don a certain large sum of money if Don agrees to sign confidentiality papers. Milo returns to Don’s apartment and relays this message. Don speaks lamentingly about the adversities that he has had to face throughout life. The next time Milo goes to the office at the university, he learns from his superiors that Purdy has made a large donation to the university. The donation had nothing to do with Milo, but Don stipulated as part of the donation that Milo should keep his job in the fundraising department. Milo is overcome by feelings of relief, shock, confusion, and sadness.

Purdy invites Milo to a party at Purdy’s apartment. Among the guests are several acquaintances from Milo’s college days, all of whom have grown up to be more successful than Milo. The party is interrupted when Don intrudes and yells with anger and sadness at Purdy. The next day, Milo is laid off from his job due to department downsizing. Milo visits Don and encourages him to make the most of his life. Over the following weeks Milo and Maura continue to drift apart, so Milo temporarily moves to a different apartment, and he searches for a new job. Eventually, Don contacts Milo to say that he is in therapy and is trying to improve himself. Unfortunately, a few weeks later, Milo reads in the news that Don is the primary suspect in a murder investigation; Don likely killed someone due to a PTSD-related frenzy.

More summaries and resources for teaching or studying The Ask.

The Ask from BookRags. (c)2022 BookRags, Inc. All rights reserved.