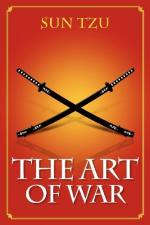 What is conceived of as the text of The Art of War is, like the question of the author, a complicated debate. Because of its extreme age, manner of composition, and means of preservation, one cannot easily classify the numerous texts claimed variously for inclusion. For instance, the most inclusive view argues for an eighty-two-chapter text; the least inclusive view doubts even the viability of the traditional core text. Most scholarly opinion, however, divides the competing claims, based on such factors as stylistics and archeological context, into inner and outer texts, a common critical device for ancient manuscripts. The first thirteen chapters, about which authenticity is nearly certain, comprise the inner text, or the Thirteen-Chapter text.

Sun-Tzu begins this chapter with a key assertion: "War is a vital matter of state." From this assertion, he reasons that the survival of a...

The Art of War from BookRags. (c)2022 BookRags, Inc. All rights reserved.