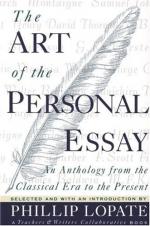 Plot Summary
+Chapters Summary and Analysis
Chapter 1, Forerunners
Chapter 2, Fountainhead
Chapter 3, The Rise of the English Essay- Page 113-211
Chapter 3, The Rise of the English Essay-Page 212-302
Chapter 4, Other Cultures, Other Continents
Chapter 5, The American Scene-Page 479-585
Chapter 5, The American Scene: Page 586-770
Free Quiz
Characters
Objects/Places
Themes
Style
Quotes
Topics for Discussion
Order our The Art of the Personal Essay: An Anthology from the Classical Era to the Present Study Guide

The Art of the Personal Essay: An Anthology from the Classical Era to the Present Quotes

Phillip Lopate
This Study Guide consists of approximately 30 pages of chapter summaries, quotes, character analysis, themes, and more - everything you need to sharpen your knowledge of The Art of the Personal Essay.

"This book attempts to put forward and interpret a tradition: the personal essay." Introduction, p. xxiii.

"These charming musings are not, strictly speaking, essays in the Western sense of the term, but fragments of ranging from a line to several pages—the primary matter of essays, so to speak." Chapter 1, p. 29.

"Most critics have viewed Dr. Johnson as a moral essayist rather than a personal essayist. Still, we see him cutting a personal figure in the essay of the fragility of friendship and procrastination seem to keenly observed not to have been drawn from his own experience." Chapter 4, p. 137.

"Addison and Stelle typically took a patronizing tone toward women, ridiculing their dependence on supposedly absurd new fashions and their alleged illogical and changeable natures. Edgeworth, seeming to agree at first...