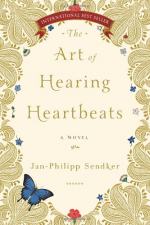 Jan-Philipp Sendker
This Study Guide consists of approximately 44 pages of chapter summaries, quotes, character analysis, themes, and more - everything you need to sharpen your knowledge of The Art of Hearing Heartbeats.

The Art of Hearing Heartbeats Summary & Study Guide includes comprehensive information and analysis to help you understand the book. This study guide contains the following sections:

This detailed literature summary also contains Quotes and a Free Quiz on The Art of Hearing Heartbeats by Jan-Philipp Sendker.

“The Art of Hearing Heartbeats” is a romance mystery novel by Jan-Philipp Sendker in which a young woman, Julia Win, sets out to track down her father four years after he disappeared in Burma. When the novel begins, Julia has recently arrived in the town of Kalaw, Thailand, from New York. Her father has abandoned her family, and she is seeking to find answers. She meets a mysterious man named U Ba at a tea house. U Ba knows almost everything about Julia, which perplexes and intrigues her. He explains he knows her through her father. U Ba speaks to Julia about the importance of love, and he begins to tell the story of her father’s first twenty years of life, something unknown to Julia and her family.

U Ba begins his story by telling Julia that her father, Tin Win, was born to a very superstitious mother and a mildly-superstitious father. An astrologer prophesied that Tin Win would be negatively affected by his eyes. The astrologer's prediction coincided with Tin Win’s mother's belief that Tin Win was a bad omen because all of the chickens in the neighborhood had died after his birth. A great aunt died eight weeks to the day after Tin Win was born. When Tin Win’s father was accidentally killed at work, Tin Win’s mother had been through enough. She abandoned Tin Win when he was six.

Tin Win was cared for and raised by a neighbor, Su Kyi. By the age of ten, he was developing cataracts that ultimately left him blind. He studied with U May, a Buddhist monk, at the local monastery. Through U May’s guidance, Tin Win learned to rely on his other senses, especially the sense of sound. By the age of fourteen, he had met a local girl of the same age named Mi Mi. Though he could not see her, he immediately fell for her because of the sound of her heartbeat and the gentle sweetness of her voice.

Mi Mi took an instant liking to Tin Win, too. She did not look down on him for his blindness. She herself had deformed legs and feet. She could not move around freely without assistance or crawling. Tin Win, however, found nothing wrong at all with Mi Mi. The two became inseparable, with Tin Win carrying Mi Mi on his back. Together, they made one whole person. She told him where to go as they traveled together. By the age of eighteen, they had sex with each other, and Mi Mi’s mother considered marriage a real possibility.

It was then that U Saw, Tin Win’s estranged and wealthy uncle, intervened. U Saw had learned of a potential personal and professional catastrophe if he did not help a family relative in need. U Saw sent for Tin Win, who was forced to leave Mi Mi behind and travel to Rangoon. Tin Win had hoped to be away for only a few weeks. While there, U Saw had Tin Win’s sight restored with surgery. According to custom, Tin Win could not argue with a generous male relative acting in the stead of a father. So, when U Saw decided to send Tin Win to Saint Paul’s High School in Rangoon, Tin Win had no choice. Meanwhile, all of the letters he and Mi Mi wrote to one another were intercepted by U Saw.

Two years passed. U Saw decided to send Tin Win to study law in the United States. He sent a letter to Mi Mi, falsely claiming to have written on Tin Win’s behalf. He told Mi Mi not to contact him again until he finished school. By then, Tin Win realized his uncle was orchestrating his future, which included work as a partner in his uncle’s business affairs and an arranged marriage. To avoid this, Tin Win stayed in the United States. He eventually met and fell in love with Julia's mother. They were married, even though he was still in love with Mi Mi. Fifty years after leaving Mi Mi, he returned to her. The two had sex and died together the next morning, wrapped in the other one's arms.

After hearing U Ba's story, Julia is stunned to learn that her father and Mi Mi have been dead for four years. U Ba explains to her that love is important. It can transcend great distances and time. As the novel closes, Julia discovers that U Ba is actually her half-brother. He is the child of Mi Mi and Tin Win.

More summaries and resources for teaching or studying The Art of Hearing Heartbeats.

The Art of Hearing Heartbeats from BookRags. (c)2022 BookRags, Inc. All rights reserved.