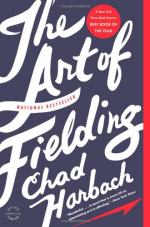 Chad Harbach
This Study Guide consists of approximately 55 pages of chapter summaries, quotes, character analysis, themes, and more - everything you need to sharpen your knowledge of The Art of Fielding.

The Art of Fielding Summary & Study Guide includes comprehensive information and analysis to help you understand the book. This study guide contains the following sections:

This detailed literature summary also contains Quotes and a Free Quiz on The Art of Fielding by Chad Harbach.

The Art of Fielding opens with an unexpected discovery. During a summer league baseball game, Mike Schwartz, a student at Westish College, discovers a ballplayer of remarkable talent: Henry Skrimshander, an unassuming young man from South Dakota who turns out to be a shortstop of remarkable intuition and efficiency. Schwartz is determined to recruit Henry for the Westish baseball team, the Harpooners. After contacting Henry's parents and working through the Westish administration, he secures Henry a place in the incoming freshman class. Henry, for his part, is somewhat disoriented upon arriving at campus, but strikes up an easygoing friendship with his roommate Owen Dunne, who is both openly gay and academically brilliant.

Both Henry and Owen make the Westish baseball team, which is led by the good-natured yet indulgent Coach Cox. Mike, however, is the one who truly transforms Henry into a powerful ballplayer, subjecting Henry to workouts and batting practice that refine his skills. By his junior year, Henry has almost set a record for error-free games; the current record-holder is Aparicio Rodriguez, a (fictional) shortstop whom Henry himself idolizes and whose book on baseball is itself called The Art of Fielding. But Henry's junior year is a crucial period for other characters as well. Mike Schwartz is applying to law schools, and Westish College president Guert Affenlight is dealing with two changes in his own life. First, his daughter Pella is dealing with the collapse of her marriage to an architect; second, President Affenlight himself has fallen helplessly in love with Owen.

Henry's junior year is upended when one of his own throws flies into the Westish dugout and incapacitates Owen; shaken, Henry is filled with a sense of anxiety that de-stabilizes his entire ability to play baseball. Despite his own efforts, he voluntarily steps down from the Westish baseball team, only to sink into a deep depression. As Henry deals with this crisis of confidence, Owen recovers and strikes up a secretive romance with President Affenlight, Mike receives a series of law school rejections and strikes up his own romance with Pella, and Pella finalizes her break from David, her estranged husband. Yet after Mike's relationship with Pella runs into tension, Pella sleeps with Henry. Mike himself discovers this liaison, and a rift opens between Mike and his onetime protege.

Even as all these characters deal with personal tensions, the Harpooners baseball team enjoys a remarkable winning streak. President Affenlight himself also seems to be headed for a personal victory; he plans to buy a house in the environs of Westish, and to more firmly establish himself and Pella (who has been auditing classes and plans to enroll) as members of the Westish community. Yet before he can put this plan in motion, President Affenlight is confronted by the Westish administration. His affair with Owen, which is against school protocol, has been discovered, and he must leave both his post and Westish itself. Shortly after learning of this unfortunate fate, President Affenlight seeks out the depressed and now self-starving Henry. President Affenlight arranges for the young ballplayer to go to South Carolina (where Westish will face Amherst in a championship game), then retires to his quarters and quietly passes away.

Henry arrives in South Carolina, where the small and by now exhausted Westish team faces the difficult task of pulling off a decisive victory. He helps out as much as he can in his depleted state, and the team itself is within a few points of triumph when the news of President Affenlight's death arrives. Owen, who is slated to bat for the Harpooners, is too stunned to play. Henry takes his place. By allowing a pitch to hit him in the head, taking first base, and then madly rushing to home, he manages to score the team's winning run. Then he blacks out and is put into medical care.

The novel nears its end in the summer after Westish's championship season. Mike has accepted a position in the Westish athletics department and has renewed his relationship with Pella, Owen is headed to Tokyo on a scholarship, and Henry (despite being recruited for professional baseball) wants to finish out his Westish education. Yet Pella wants to honor her departed father, who was draw to life at sea and to the sea adventures of Herman Melville, by re-burying him in the lake near Westish College itself. Owen, Mike, and Henry meet her one night and assist her in this endeavor. By the time they are done honoring and re-locating President Affenlight, it is almost time for the day to begin. Owen sets off for the airport, Pella sets off for her job in the Westish dining hall, and Mike takes out a bucket of baseballs and begins hitting them to Henry, who, after much trial and effort, seems to be re-claiming some of his former talent.

More summaries and resources for teaching or studying The Art of Fielding.

The Art of Fielding from BookRags. (c)2022 BookRags, Inc. All rights reserved.