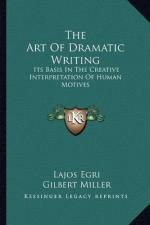 Lajos Egri
This Study Guide consists of approximately 33 pages of chapter summaries, quotes, character analysis, themes, and more - everything you need to sharpen your knowledge of The Art of Dramatic Writing.

The Art of Dramatic Writing Summary & Study Guide includes comprehensive information and analysis to help you understand the book. This study guide contains the following sections:

This detailed literature summary also contains Topics for Discussion and a Free Quiz on The Art of Dramatic Writing by Lajos Egri.

First published in 1942 under the title "How to Write a Play," The Art of Dramatic Writing became such a landmark in not only playwriting, but storytelling of any kind, that it was revised in 1946 and given the title it has today. Lajos Egri's book is a classic, deconstructing the pieces of a play, analyzing them all, then putting the pieces back together in the simplest way, writing in an exceptionally organized fashion without any nonsensical attitude. The confusing jargon that fills the spaces of most guides, is nonexistent here. It is completely straightforward.

Egri thinks writing should hold its ground on concepts present throughout the entirety of a play. The essentials, such as premise, transition, and character growth, are what he believes in. He is opposed to the idea that a play should center around singular facets, like exposition or an obligatory scene. Egri is a character man. Characters come first to him. This impression is evident toward the beginning of the book, and the remainder of it revolves around these beliefs, that plays should not revolve around individual scenes or ideas, but should work as a whole to accomplish something big the writer believes in.

The book is split into four sections, the first three representing the big ideas Egri wants his writers to attend to: Premise, Character, and Conflict. 'Premise' does not contain any chapters, but is a moderately lengthy fraction of the book detailing what the author will soon prove the most important aspect of a play's first stages.

In 'Character,' there are eleven chapters. Egri begins by picking apart a character, and what affects their decision-making and actions. This progresses to descriptions of the growth process and the strength of a character. Egri moves on to his opinion on plot being secondary to character. He discusses next the different types of characters, and ends the section with chapters on how they come together and conflict with one another.

Portions of what is learned in that section are used to further the points made in the ten chapters of 'Conflict.' This section begins by talking of how action originates, what causes it, and the effects from it. Then, the four different types of conflict are studied. The section is rounded out with the ever-important facet of transition, and an examination of how the three-step process of crisis, climax and resolution should work.

The fourth section is for general queries that do not fit into the above big categories. Many of the fourteen chapters here, however, contain very vital information, all with expert opinions by the author. Areas of focus include dialogue, experimenting, timeliness, entrances and exits, and television writing. Also, questions regarding what defines art, why bad plays are well-received, and what defines genius are examined here.

More summaries and resources for teaching or studying The Art of Dramatic Writing.

The Art of Dramatic Writing from BookRags. (c)2022 BookRags, Inc. All rights reserved.