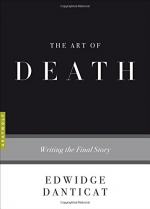 The Art of Death Summary & Study Guide includes comprehensive information and analysis to help you understand the book. This study guide contains the following sections:

This detailed literature summary also contains Topics for Discussion on The Art of Death by Danticat, Edwidge .

The following version of this book was used to create this study guide: Danticat, Edwidge. The Art of Death. Graywolf Press, 2017.

Edwidge Danticat’s The Art of Death is a series of non-fiction essays written in the first-person, exploring how one should write about the experience of death. Danticat approaches this discussion of death by disclosing her own experiences with death, specifically her experience with the death of her mother. As a result, Danticat’s essays are extremely personal: seamlessly, she shifts between literary analysis to autobiographical anecdotes to amateur philosophy about the nature of death.

Danticat begins her series of essays with “Introduction: Writing Life,” an essay that functions as a prologue for the rest of the work. In her introduction, Danticat relates one of the last conversations her mother had with a doctor, revealing her mother’s illness, her own occupation as an author, and her mother’s eventual death. Danticat concludes her prologue by confiding that she writes in order to “learn” and “relearn” how one writes about, and by extension how one deals with, death (7).

After her introduction, Danticat launches into her discussion of death, writing, and life. She begins with “Living Dyingly,” an essay in which Danticat explores how those who know they will die soon—for example, those diagnosed with cancer—live. Danticat draws examples from the literary canon, such as Christopher Hitchens and Leo Tolstoy, as well as examples from her own life, such as her mother.

Danticat’s next essay, “Dying Together,” undertakes the question of natural disasters and the death of communities. She examines works of fiction that portray these communal deaths, such as Haruki Murakami’s After the Quake, eventually concluding that the best way to understand catastrophes is through one individual’s story.

The following essays, “Wanting to Die” and “Condemned to Die” function as a pair: one muses on the problem of suicide; the other capital punishment. Danticat begins both essays with quotes from Albert Camus, who suggests suicide is the ultimate philosophical problem, and that condemning a man to die is its contrary. Throughout these two essays, Danticat suggests that at times, death is preferable to life, using slavery in the U.S. as an example.

After these more philosophical essays, Danticat again returns to a personal, intimate tone in “Close Calls.” Here, she relates her own near-death experiences, concluding that “in the midst of life, we are in death,” and that “close calls” with death alert us to this reality (125). The following essay, “Circles and Circles of Sorrow,” is perhaps Danticat’s most personal: in it, she directly addresses her mother’s death, the effects it had on her, and the universal implications of motherhood and death. At the essay’s end, Danticat includes her poem, “A New Sky,” which articulates what Danticat imagines her mother’s final prayer to be.

Danticat concludes her series of essays with “Feetfirst,” in which Danticat achieves tentative closure on her mother’s death. This final essay ends with Danticat directly addressing her mother, telling her that Danticat “misses” and “loves” her, and insisting that she “please rest” (173).