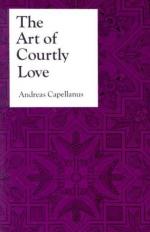 Andreas Capellanus
This Study Guide consists of approximately 24 pages of chapter summaries, quotes, character analysis, themes, and more - everything you need to sharpen your knowledge of The Art of Courtly Love.

The Art of Courtly Love Summary & Study Guide includes comprehensive information and analysis to help you understand the book. This study guide contains the following sections:

This detailed literature summary also contains Topics for Discussion and a Free Quiz on The Art of Courtly Love by Andreas Capellanus.

The Art of Courtly Love is a late twelfth century guide book on the genesis, maintenance, and rejection of courtly love. It is written to an unknown young man named Walter by an only slightly less mysterious man, Andreas Capellanus or 'Andrew the Chaplain' who was associated with Countess Marie de Troyes of Champagne, France. The book is known today for attempts to classify the rules of love.

Courtly love is a specific sort of romance that occurred in the medieval period primarily amongst the upper class. In that time period, marriages tended to be arranged for social and economic reasons. Therefore, love in marriage was unusual. So husbands and wives tended to seek romantic attachment outside of marriage and courtly love became a social practice that gave them such a romantic outlet. Courtly love permitted intense emotional and romantic attachment but prevented marital affection.

The author divides The Art of Courtly Love into three books. Book One, 'Introduction to the Treatise on Love,' outlines its basic set of concepts and information concerning love and elaborates the effects of love. It also contains eight dialogues between members of different social classes looking to initiate courtly love such as those between each combination of middle-class, simple noble, higher noble men and women. Love is understood as an internal suffering that results from being overwhelmed and focused upon the beauty of some member of the other sex. This produces a desire to want nothing more than the beloved. True love often brings out man's greatest virtues and brings out humility. It is claimed in book one that marriage kills love. Almost no one in the dialogues expresses any other opinion.

After the eight dialogues, Capellanus discusses other forms of love, such as the love of the clergy, nuns, peasants, and prostitutes.

Book Two, 'How Love May Be Retained' explains all the different practices that one may engage in to keep the intensity of courtly love going. Courtly love is unstable and can easily decay. The 'King of Love' is said to have laid down thirty-one rules of love. These rules are analyzed in detail in the chapter. These rules include 'He who is not jealous cannot love' and 'A man in love is always apprehensive' and 'A true lover is constantly and without intermission possessed by the thought of his beloved.'

Book Three, 'The Rejection of Love' gives Andreas' true advice to Walter. In fact, Andreas thinks that courtly love is not worth the cost. He admits to have given Walter advice on how to attain and maintain love but he encourages him not to use it. The third book is full of arguments against love including religious ones and arguments based on the faults of women.

More summaries and resources for teaching or studying The Art of Courtly Love.

The Art of Courtly Love from BookRags. (c)2022 BookRags, Inc. All rights reserved.