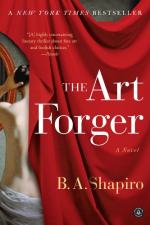 B. A. Shapiro
This Study Guide consists of approximately 45 pages of chapter summaries, quotes, character analysis, themes, and more - everything you need to sharpen your knowledge of The Art Forger.

This detailed literature summary also contains Quotes and a Free Quiz on The Art Forger by B. A. Shapiro.

The Art Forger is a novel by B. A. Shapiro in which painting reproductionist Claire Roth is hired to duplicate the Degas painting After the Bath, one of 13 paintings stolen during the infamous Gardner Museum heist more than two decades before. Claire is a down-on-her-luck painter who makes a living by creating exact copies of masterpieces for the website Reproductions.com. Claire has been shunned by the art world ever since the death of her former professor and lover, Isaac Cullion, by suicide, after she tried to go public with the fact that his most famous paintings were her own work. Although Claire does have some defenders, most have written her off as “The Great Pretender.”

When her acquaintance and Markel Gallery owner Aiden Markel pays her a visit, Claire is surprised. She is outright stunned when Markel enlists her help in creating an exact forgery of the fifth painting in the After the Bath series by Degas, stolen from the Gardner Museum and not seen since. The painting features three nude women, and must be copied so that Markel may act as a broker between an unknown seller and a buyer named Patel from India. For her work, Claire will be paid $50,000, plus expenses, in addition to receiving her own one-person show at Markel’s Gallery, which Markel will personally hype up. When Markel explains his ultimate goal is to return the original Degas to the Gardner and that Claire cannot legally be held responsible for copying a painting because it is not illegal, Claire agrees to help.

Claire sets to work and over several weeks reproduces the painting to such exacting lengths that Markel cannot tell the difference between the original and the forgery. However, Claire discovers during her work that the original Bath is itself a forgery, for it differs in small but obvious ways from Degas’s known work. Claire keeps this to herself, however. Patel is soon after caught trying to leave the country with Claire’s forged Bath, and is arrested. Markel is soon after arrested, and suspicion comes to fall on Claire when she and her friend, Rik, who works at the Gardner, are caught by the police searching the basement for a subbasement room that shows up on blueprints but cannot be found in person. Claire, who believes the real Degas is being kept in the hidden room, reveals this information not only to Rik but to the museum director and the FBI. While Claire is confirmed as the forger of the painting Patel is caught with, the subbasement room is found to be empty. Claire becomes a prime suspect in everything going on.

However, it is revealed that the Bath painting believed to be authentic is actually a forgery by Virgil Rendell, the artist and lifelong lover of Amelia, a sort of step-niece to Isabella Stewart Gardner, the woman who put together the Gardner Museum collection. As Claire learns from research and Gardner’s sole surviving relative, Sandra Stoneham, Gardner was painted nude by Degas but did not want the painting made public until after her death due to the scandal it could cause, so she had Rendell forge the painting to exclude her so that it could be hung in the museum, while the real painting was stowed away in the secret subbasement room. But when Isabella died, Amelia kept the real Bath and passed it down through her family descendants. Claire is cleared of all suspicion and charges, and goes on to have a wildly successful show of her own original work. Markel remains in jail, awaiting trial for his role in the brokerage of the Rendell forgery.

More summaries and resources for teaching or studying The Art Forger.