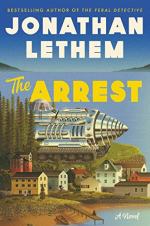 Jonathan Lethem
This Study Guide consists of approximately 37 pages of chapter summaries, quotes, character analysis, themes, and more - everything you need to sharpen your knowledge of The Arrest.

In Chapter 66, the townspeople have gathered on Quarry Island. The other townspeople do not seem worried. They seem to have a plan, although they do not share it with Journeyman.

In Chapter 67, the next morning, Journeyman watches as the townspeople make final preparations on the mysterious tower that they have constructed.

Chapter 68 contains a picture that Journeyman found, and that reminds him of the tower.

In Chapter 69, in the evening, Todbaum arrives on the island in the Blue Streak. The vehicle soon becomes caught in a trap set by Maddy and the other townspeople. Todbaum addresses the townspeople through the vehicle’s speakers. He says that the trap is inducing a meltdown in the Blue Streak’s core and that they will all die in an explosion if they do not release him. Maddy does not believe him, and she activates the next phase...

More summaries and resources for teaching or studying The Arrest.

The Arrest from BookRags. (c)2022 BookRags, Inc. All rights reserved.