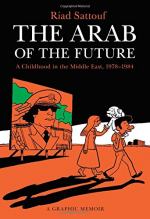 The Arab of the Future: A Childhood in the Middle East, 1978-1984 Summary & Study Guide Description

The Arab of the Future: A Childhood in the Middle East, 1978-1984 Summary & Study Guide includes comprehensive information and analysis to help you understand the book. This study guide contains the following sections:

This detailed literature summary also contains Topics for Discussion on The Arab of the Future: A Childhood in the Middle East, 1978-1984 by Riad Sattouf.

The following version of the book was used to create this study guide: Sattouf, Riad. The Arab of the Future: A Childhood in the Middle East, 1978-1984. Metropolitan Books, 2015. First U.S. edition.

In Libya, Riad takes a liking to Gaddafi and the way he is treated by other people. Riad has friends in his apartment building, but the family struggles due to food rationing and laws that allow anybody to live in any open house. When Riad’s mother is pregnant the family decides to return to France before Riad’s father is done teaching.

Riad and his mother return to France and live with Riad’s grandmother. After a while Riad’s father joins them in France and tells everyone he is looking for a professorship in France. Riad’s mother gives birth to another son and Riad has a baby brother.

While in Syria, Riad learns about Hafez Al-Assad, but he decides that he does not like Assad as much as Gaddafi. Riad is mocked by his cousins because his blond hair makes him look Jewish. Riad slowly learns Arabic and makes friends with some of his cousins who teach him about life in Syria.

Riad has a number of tribulations in Syria, including seeing a hanging, becoming extremely ill and not having access to medication, and watching neighborhood boys dismember a puppy. Riad is scared to start going to school in Syria because of how some of the other students treat him.

Luckily, his family returns to France shortly before Riad is supposed to start school. Riad’s family spends the summer in France. Riad is surprised to learn that his family is going back to Syria. What Riad thought was a permanent move was merely a summer vacation.