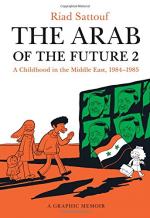 France is a country in Western Europe. The accent color for panels that take place in France is blue. France is where Riad's parents met, and where Riad was born. France is where Riad travels to on holiday to visit his mother's family. French was Riad's primary language, and remains his mother's primary language. However, now that Riad is going to school in Syria France feels less like his home and more like a place he goes on vacation.

Syria is a country in the levant region of the Middle East. The accent color for panels that take place in Syria is pink. Riad's father is from Syria and is very excited for his family to continue to live in his country. Riad's family lives in Syria during the regime of Hafez Al-Assad, a military general who seized the presidency. Riad's father's religiosity and Syrian pride...