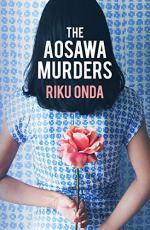 Riku Onda
This Study Guide consists of approximately 46 pages of chapter summaries, quotes, character analysis, themes, and more - everything you need to sharpen your knowledge of The Aosawa Murders.

The Aosawa home is described as a mansion. It is connected to the Aosawa clinic. The family has owned the compound for decades. It is located in the Nakaogaki district in Japan. It was built by an architect who combined Western and Japanese styles into the overall structure. Because of this, the house has a very distinct look including concrete walls and round windows. The Aosawas and their guests were poisoned in the blue dining room. Upstairs, there is another room painted blue--a small prayer room that has nothing inside it but a shelf with a lily in a vase.

The bench is located near the garden of the temple grounds by the sea. The bench overlooks the ocean. It is shaped like an S and is painted with red flowers. Two people can sit on opposite sides of the bench and speak with one another...

More summaries and resources for teaching or studying The Aosawa Murders.