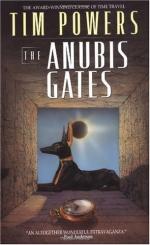 Tim Powers
This Study Guide consists of approximately 41 pages of chapter summaries, quotes, character analysis, themes, and more - everything you need to sharpen your knowledge of The Anubis Gates.

This detailed literature summary also contains Topics for Discussion and a Free Quiz on The Anubis Gates by Tim Powers.

The Anubis Gates by Tim Powers is a delightful tale of time travel, magic, history, romance, and deceit. In the beginning of the novel, it is 1802 and Amenophis Fikee and Doctor Romany, both magical gypsies, attempt to open a gate and summon Anubis for their master, who wants to purge Egypt of all foreign powers. Doctor Romany is a magical duplicate, or ka, of Doctor Romanelli in Egypt. Their magic, however, disappears and leaves Fikee a howling animal who runs from camp. In current times, Brendan Doyle, the main character, finds himself commissioned for a position with J. Cochran Darrow, an ill, yet still powerful man.

Darrow's supposed plan is to travel back in time through a hole in the time stream back to 1810 to hear the poet Coleridge speak. Darrow has hired a staff, including Doyle's friend Steerforth Benner, to assist with the trip, and has allowed ten other participants to pay a million dollars each for their passage. Following the time jump, Doyle finds himself kidnapped by the magical gypsies who seek the key to time travel; Doyle misses the jump back. He narrowly escapes and after spending several days attempting to assimilate into the culture, Doyle meets master of thieves Horrabin. Horrabin, however, is linked to the gypsies. Doyle goes to work for Copenhagen Jack as a beggar and meets Jacky, a young woman pretending to be a man as she hunts Dog Face Joe, a werewolf who killed her fiance. Doyle finds himself constantly on the run as Horrabin and Romany hunt him. Additionally, Doyle meets Benner again, who informs him that Darrow's true plan was to return to 1810, find Dog Face Joe, and use him to switch bodies so he can live out his healthy life as a rich man. Throughout his struggle to survive and return home, Doyle meets several famous persons as the gypsies attempt to rewrite history, including poet Lord Byron. After being attacked by Dog Face Joe himself, Doyle finds himself in the body of Benner and realizes he is known in 1810 as poet William Ashbless, who Doyle was researching in modern times. Following a journey back to mid 1600's, Doyle stops Romanelli from altering history. Soon after his return, however, he is kidnapped again and brought to the Master in Egypt, whom he eventually kills. Meanwhile, in England, Jacky discovers Darrow's plan and kills both him and Dog Face Joe.

Upon his return to London, Jacky finds him, but the two are soon kidnapped by Romanelli, along with poet Coleridge. Doyle is taken to the basement of Rat Castle, where he is tortured. Coleridge unlocks the cages of Horrabin's experimental animals, and the animals attack Horrabin and Romanelli, allowing Jacky and Coleridge to escape. Meanwhile a severely wounded Romanelli and Doyle travel to the underworld, where Romanelli is eaten by Apep; whereas, Doyle is renewed by Ra. Doyle meets up again with Jacky, who he realizes is the wife of Ashbless. Years later, Doyle goes to the place Ashbless was known to die to complete the circle of history, only to realize his supposed killer is a ka made of him during his time in Egypt. He kills the ka and is free to live his life.

More summaries and resources for teaching or studying The Anubis Gates.