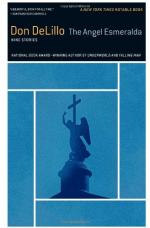 Don Delillo
This Study Guide consists of approximately 35 pages of chapter summaries, quotes, character analysis, themes, and more - everything you need to sharpen your knowledge of The Angel Esmeralda.

Don DeLillo's "The Angel Esmeralda" consists of nine short stories originally published in six magazines, from 1979 to 2011. In the first story, "Creation," all of the three main characters become completely absorbed in their own reactions to being unable to leave a beautiful island because of airline delays. In "Human Movements in World War III," two astronauts in a space capsule orbit Earth, collecting information for America during the early weeks of the third world war. In "The Runner," a young man runs laps around a pond in an inner-city park while someone kidnaps a child from its mother. In "The Ivory Acrobat," a young American woman working in Greece experiences two earthquakes and tries to cope with the terror they induce in her. In "The Angel Esmeralda," two nuns serve the poor and the afflicted in a Bronx community beset by violence that frequently ends in the deaths of children. In "Baader-Meinhof," a divorcee who becomes fascinated by portraits of dead terrorists takes up a risky acquaintanceship with a stranger. In "Midnight in Dostoevsky," two students create an elaborate fictional story of the life of a man they know only by glimpsing him walking on the street. In "Hammer and Sickle," an inmate in a minimum-security prison watches his two young daughters present doom-and-gloom news broadcasts on a children's television program. In "The Starveling," a man whose life consists of going to the cinema becomes infatuated with a woman who likewise attends one movie after another, day after day.

DeLillo, a critically acclaimed American novelist, displays a remarkably consistent engagement in the important question of the challenges faced by people in finding meaning and a sense of belonging in contemporary society, beset as it is by the alienating forces of commercialism, personal interest, and ambition. Each of these stories deals with people who live at an emotional distance from others around them. Often, the prevailing attitudes in a capitalistic society play a major role in impeding the ability of characters in the stories to forge a spiritual connection between themselves and the whole of existence. Over and over, the problem faced by the characters in these different situations is the same one of how to be fully engaged in a society that seems bent on disengagement through manipulating, exploiting, sidelining, or destroying them. DeLillo's message seems to be that individual salvation can occur only through societal transformation, which must begin with the individual. The problem is that the structures and institutions of contemporary American society do not promote empathy and spiritual fulfillment. This makes it very difficult for an individual to maintain a healthy connection to society, as the author's characters repeatedly demonstrate. If DeLillo offers any solution, it is merely to portray sympathetically those characters who make serious efforts to forge connections with others, even in the midst of conditions that promote divisiveness. More important, the author persuasively and entertainingly dramatizes the challenges, as he sees them, of remaining spiritually and emotionally engaged in the modern world.

More summaries and resources for teaching or studying The Angel Esmeralda: Nine Stories.