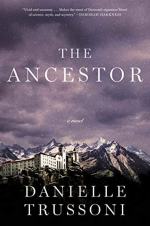 Danielle Trussoni
This Study Guide consists of approximately 81 pages of chapter summaries, quotes, character analysis, themes, and more - everything you need to sharpen your knowledge of The Ancestor.

In Chapter 10, in the morning, Greta brought breakfast as well as a pot of homemade ointment for the scratch on Bert’s face. Bert suggested she might need to see a doctor, but Bert said there were no doctors there, only Bernadette who had made the ointment.

After breakfast, Bert went to look for Dolores. She quickly became lost in the maze of hallways and staircases. She walked for some time before she Dolores call her by her full name. Dolores and Bert talked about how Bert had been identified through a DNA test. Dolores thought it was terrible that Bert had been linked to the family through saliva. One's lineage was usually traced through church records.

Dolores told Bert that she had never known Giovanni, but was not surprised to learn he had killed himself. She explained he had already shown he...

More summaries and resources for teaching or studying The Ancestor.

The Ancestor from BookRags. (c)2022 BookRags, Inc. All rights reserved.