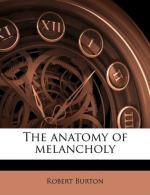 Robert Burton (scholar)
This Study Guide consists of approximately 30 pages of chapter summaries, quotes, character analysis, themes, and more - everything you need to sharpen your knowledge of The Anatomy of Melancholy.

The Anatomy of Melancholy Summary & Study Guide includes comprehensive information and analysis to help you understand the book. This study guide contains the following sections:

This detailed literature summary also contains Topics for Discussion and a Free Quiz on The Anatomy of Melancholy by Robert Burton (scholar).

This is one of the first treatises on Melancholy—in contemporary language called emotional depression. Melancholy is a condition that can be less severe than clinical depression or as bad. Melancholy has diverse causes and a variety of treatments and cures are available. The author writes about these. This book is highly unusual in that the original author lived from 1577-1640 A.D. in England. During the introduction it is explained that this treatise is more of a composite than an original work in the pure sense of the term. It is a blend of the science of the day, which had not yet separated into different branches. There is lack of knowledge of many things, but the approach towards the cure is holistic.

Robert Burton is more a scholar and librarian than either a scientist or physician. The work seems to run the gambit from entirely serious to less so. It is written in the manner of a thorough treatise upon a given topic in contrast to anything less complete and exhaustive. The author is known to have modified and appended much that had already been written. This was the normal way to update works at the time; the insertion of newer materials mixed in with the old.

The author uses the main resources made available to him for the book. These show the traditions of knowledge that are prevalent and competing with each other at the time. One of these is that the author has great respect for astrology, but is well aware that this system had fallen out of favor. He is an educated man, living in a Christianized world. He has knowledge of many of the great physicians of history and realizes that readers might respect these references more. As such, he provides information about these, and about supernatural sources and insights suggested by the philosophers. Hence, he covers the main trends in knowledge and the application of it in this compendium of insight and instruction into the world of melancholia.

More summaries and resources for teaching or studying The Anatomy of Melancholy.

The Anatomy of Melancholy from BookRags. (c)2022 BookRags, Inc. All rights reserved.